January 14, 2021, 1:40 PM · In a quiet neighborhood in Silver Lake, located in Los Angeles, California, lives an alchemist. Unlike his counterparts of an earlier age who attempted to shape and transmute base metals into gold, this craftsman combines wood, pigments, glue, gouges, and planes and transforms them into living sculptures that produce sound. And a violin is alive. It has a characteristic voice that is produced by the materials used in its crafting. All the materials have resonant frequencies that, at their optimum, function cohesively, like a high-end tone-generator/speaker system to produce the clear, captivating, and alluring sound that is the violin’s voice. 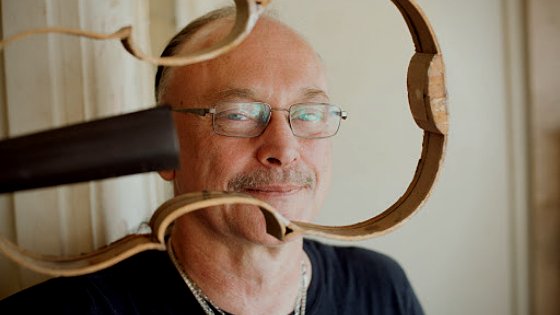 Michael Fischer crafts Violins, Violas, and Cellos at his Silver Lake workshop. He also repairs, restores, and sells old antique instruments. I have had some experience with Michael’s instruments as he was gracious enough to allow me to borrow one of his amazingly robust Gaspar Bertolotti da Salo Viola copies for an extended period as I prepared for auditions and concerts. I am forever indebted to him for his extraordinary grace and preternatural consideration.

Here I am with said M. Fischer viola at the 10-hour Bach Marathon at Union Station. I found in his viola not only an instrument of incredible rugged beauty but of amazing subtlety of tone. Exploring the Cello Suites and transcriptions of the Sonatas and Partitas on this viola, was an endless “aha” moment as the instrument seemed to effortlessly produce the tone I was searching for and greatly expanded my sonic landscape and active imagination.

As a violist, it is often difficult to find an instrument that has an attractive voice, with comfortable measurements, and evenness of tone across the strings. As a result of their playability and evenness of response Michael’s instruments have been and are being utilized by studio musicians, leading soloists, and quartet players. 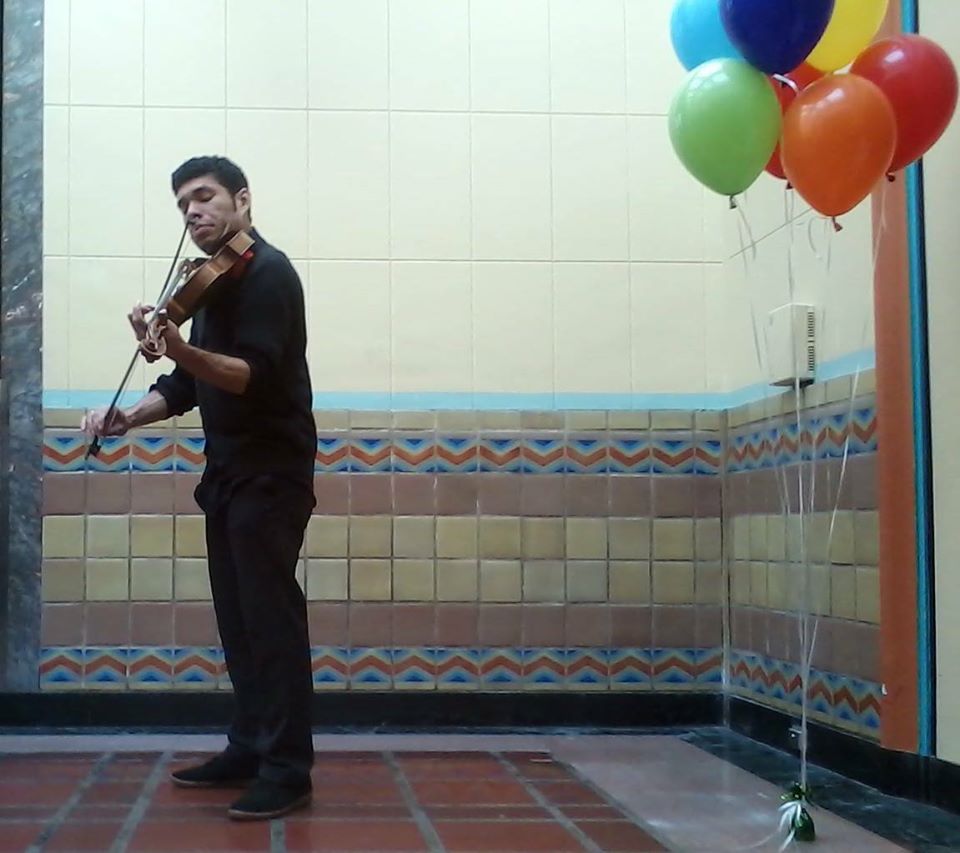 On the day of my visit, which was arranged in advance due to pandemic restrictions, I had the opportunity to examine and play some of Michael’s violins. Michael had laid out five instruments which he had recently produced. They included copies of Italian antiques by Antonio Stradivari, Carlo Tononi, and Joseph Guarneri “del Gesu”.

Michael’s most recent instrument is an extraordinary bench copy of the 1731 "ex-Huberman, ex-Ricci" del Gesù, which is currently played by Midori Goto. As an aside, an instrument that has been termed a bench copy is a disciplined exercise in reproduction and copying skill for any luthier. One of the main goals of a bench copy is to reproduce the appearance in terms of textures, pigments, and numerous other details that an antique instrument would exhibit after 200 or 300 years of usage. The reproduction of these “wear patterns” and “antiquing” is immensely complex. The successful application and execution of these reproduction techniques requires years of training and countless hours of study and handling of fine antique Italian and French instruments and their bows.

The second goal of a bench copy, but perhaps the primary reason for any instruments’ existence, one might argue, is the attempt to capture some of the character of tone of the original instrument on which it is based. Furthermore, a bench copy also denotes the fact that the actual artifact or instrument was present during the copy’s production. Having the original instrument present provides a wealth of inspiration and in a real sense, a direct communion with the maker of the original. I am a self-professed violin nerd and I am a great admirer of Ruggiero Ricci’s playing. So, to have a connection to Ricci, regardless of the tenuousness, gave me a real kick. 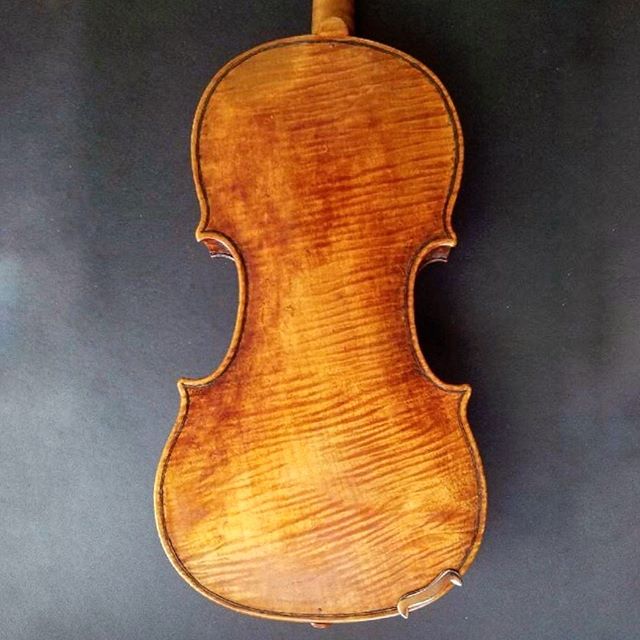 Michael gave me a brief synopsis of each instrument as well as provided insights into his choice of materials and what forms of inspiration might had been present during their construction. A constant probing mind inspires Michael to utilize exotic and tropical woods that would not normally be utilized in the Violin’s construction but as can be seen, the results are beautiful, dazzling, and unique. 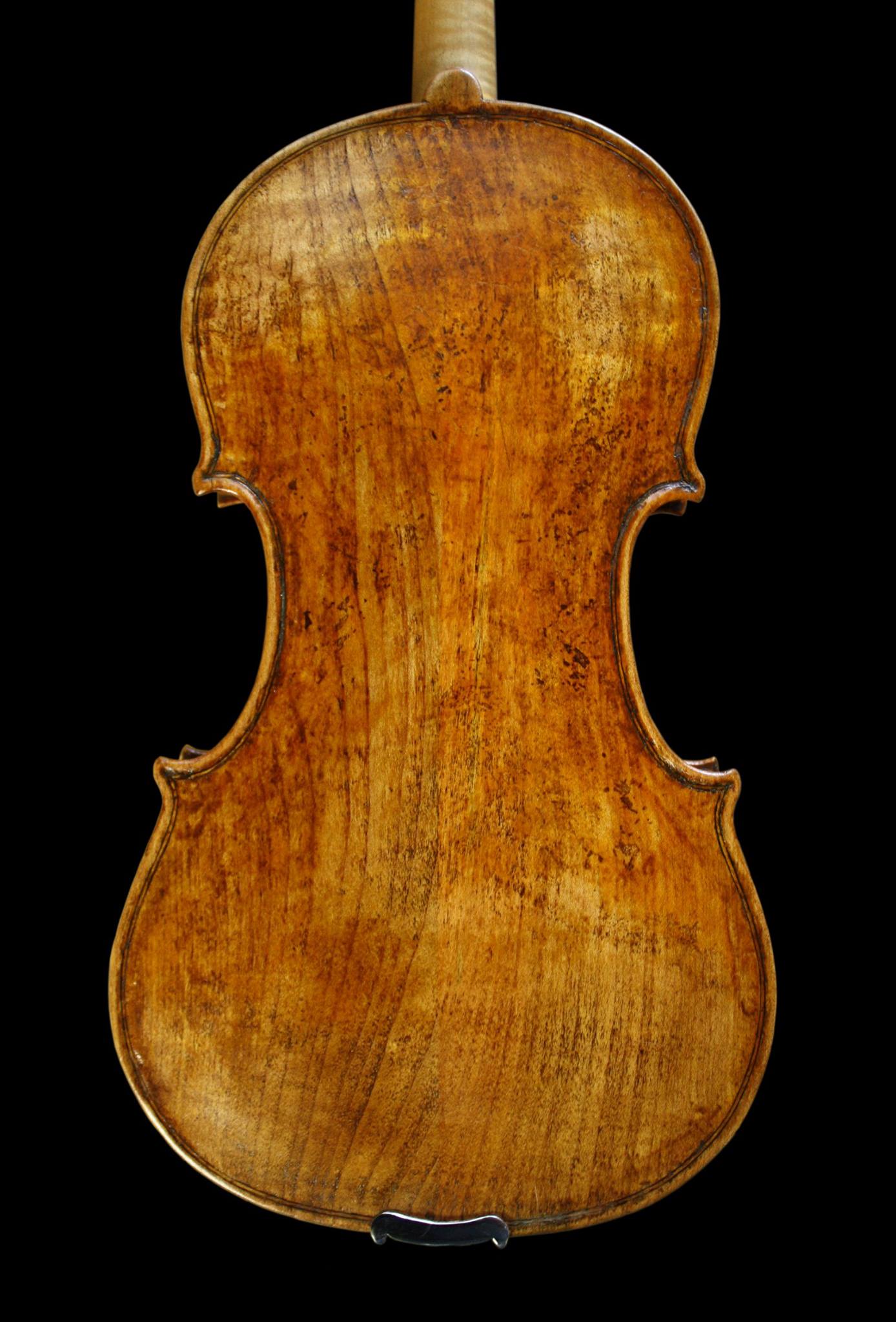 A craftsman, constantly driving his own knowledge and inquires, Michael Fischer constantly strives to “better” himself with each instrument he produces. It should be noted, though, that instruments can be likened to people: they can be compared, but each is has its own personality and merits that are activated, shaped, and colored differently depending on the player and conditions. While its construction might be reduced to the successful application of its combined materials, it represents more than the sum of its parts.

The instruments of the violin family -- perhaps through merits of the intimacy they inherently inspire, or the depths of creativity they facilitate -- are often imbued with lively and actual personalities of their own. Players often describe instruments as having masculine/feminine characteristics. It is interesting to ponder the possibility that the violin may function as a nexus or vortex to the archetypal androgynous self which transcends dualities and opposites. Some players even allude to their instruments as being actual vessels for spirits, similar to the genie in the bottle, of the artists who previously concertized on them.

Yehudi Menuhin once observed, "A great violin is alive; its very shape embodies its maker's intentions, and its wood stores the history, or the soul, of its successive owners. I never play without feeling that I have released or, alas, violated spirits." 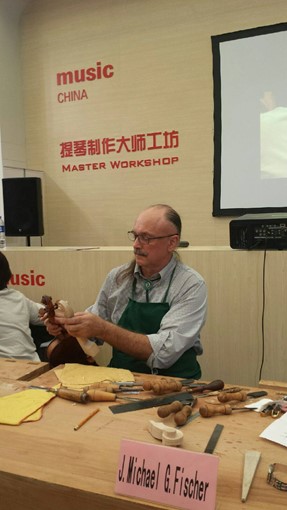 Here is a little bit more about this humble and driven craftsman, taken from his website: Michael Fischer crafts violins. Michael Fischer was born and raised in the South of Germany. At the age of 18 he decided to learn the art of violin-making, which offered him a fulfilling mixture of craft, visual arts, and music.

He attended the Violin Making School in Mittenwald, Germany; and after graduating, continued on to London to make viola-da-gambas and baroque instruments for Dietrich Kessler at Withers. While in London he also worked for the internationally renowned Charles Beare, performing complex restorations and studying many fine, old instruments in the Beare’s shop.

In the early 1980s Fischer moved to Los Angeles to work at Hans Weisshaar’s shop. In 1984 he opened his own shop with a concentration on restoring instruments. This year he celebrates his 36th year in business.

While restoring a severely damaged Mateo Gofriller violin built in 1697, he thought to make a copy of it “just for fun”. When the two violins were finished, he offered them together and to his surprise, most musicians preferred the sound of his copy.

Since then, he has made and sold nearly 300 copies of specific instruments, while also continuing the more traditional work of restorations and sale of fine old string instruments and bows. His instruments are played by professionals all over the world. He has received testimonials from some of the finest musicians and soloists, like Gil Shaham and Gidon Kremer, about the performance of his instruments.

Gidon Kremer, travelling by train to act as soloist with the Baltimore Symphony Orchestra, managed to forget to collect his 1730 del Gesù from the luggage rack in his cabin. While he wasn’t entirely unperturbed after realizing his mistake, he proceeded on to the rehearsal and played the concertmaster’s violin- a Michael Fischer. When the rehearsal ended his prized original del Gesù was backstage, thanks to quick thinking porters, luggage handlers, and artistic liasons. Read more of the original article here. 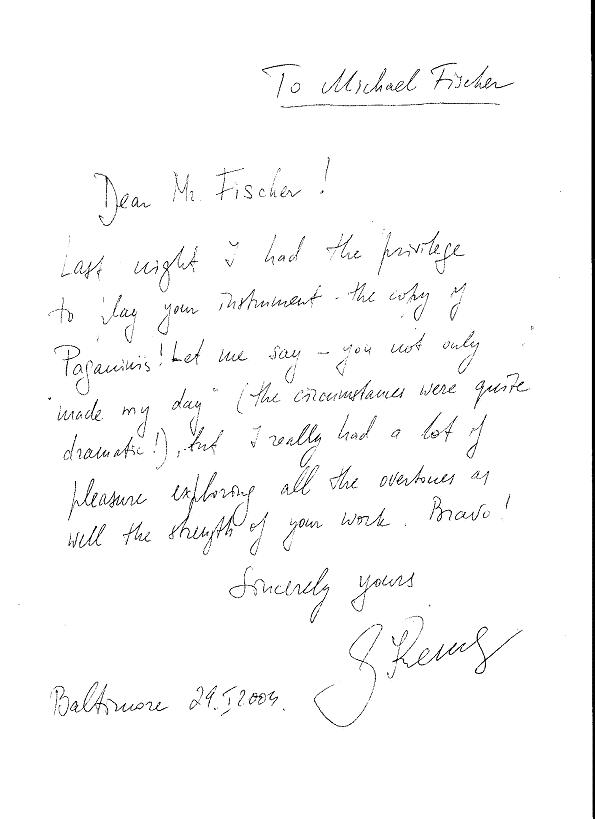 January 15, 2021 at 03:31 AM · I truly enjoyed this fascinating article and learned a great deal. Bravo, Felix! Thank you for the education about bench copies and Mr. Fischer's artistry.

January 15, 2021 at 04:01 PM · Thank you for a truly intimate look into Mr. Fischer’s shop and his artistry. You have written very eloquently about the aesthetics and craftsmanship of a master.