July 4, 2020, 11:49 AM · For today’s Fiddlers Favorites we have the multi-talented Canadian violinist Nikki Chooi bringing us his apple crumble recipe, perfect for this Fourth of July weekend! 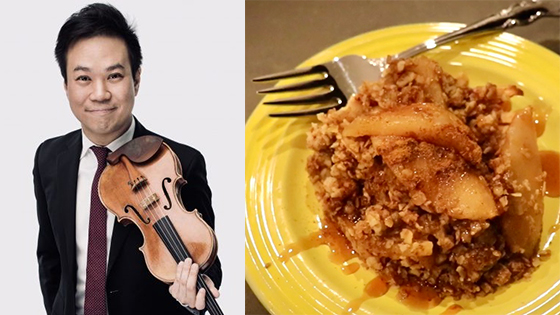 The multi-faceted Nikki has served not only as concertmaster of New York's MET Orchestra, but also in the cross-over ensemble Time for Three, performing in genres ranging from bluegrass to pop. In collaboration with From the Top and Universal Music, the group released a rendition of Taylor Swift’s "Shake it Off" to record-breaking views. He has also appeared as Guest Concertmaster with the Pittsburgh Symphony, Houston Symphony, and Sydney Symphony.

Nikki began his studies at the Victoria Conservatory, Mount Royal Conservatory, and at the National Arts Centre Young Artist Programme with Pinchas Zukerman. He completed his formal studies at the Curtis Institute and the Juilliard School under the mentorship of Joseph Silverstein, Ida Kavafian, and Donald Weilerstein.

Happy 4th of July to everyone and enjoy this delicious, quick and easy recipe !