May 16, 2020, 10:21 PM · Many of you may recognize today's Fiddler’s Favorite because she is one of the brightest young stars on the conducting scene. What you may not know is the beautiful, talented Karina Canellakis is also a fantastic violinist who studied with Ida Kavafian (Fiddlers Favorites Episode # 3) at the Curtis Institute of Music. 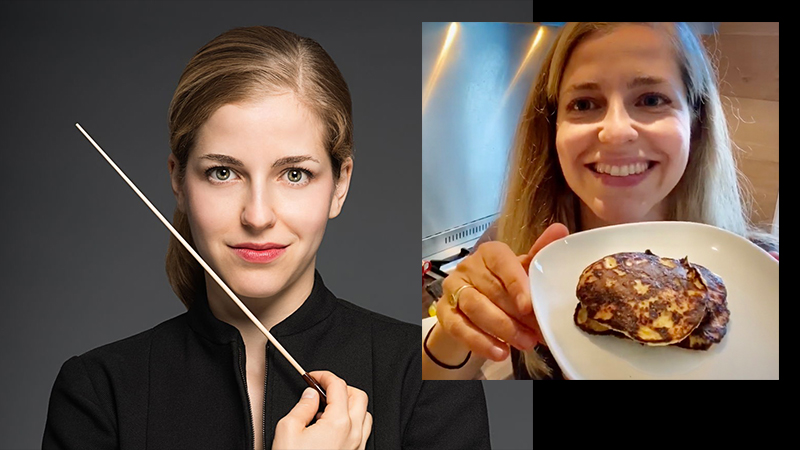 As a violinist, she played as a guest violinist in the Chicago Symphony, Berlin Philharmonic and served on several occasions as Concertmaster of the Bergen Philharmonic in Norway. She also spent many summers performing Chamber Music at the Marlboro Festival. Karina was initially encouraged to pursue conducting by Sir Simon Rattle and studied conducting at the Juilliard School. In 2016, she won the prestigious Sir George Solti conducting Award.

Not only does this this wonderwoman speak fluent French, German and Italian, she also makes some amazing pancakes, as you will soon see! Thank you, Karina, for this fun and easy recipe!

Mash up the banana, mix in eggs and oats and milk, then make pancakes in a hot skillet.

*This recipe is gluten and dairy free, as long as you don’t use real milk!

May 17, 2020 at 10:38 AM · I deeply enjoyed hearing her conduct a wonderful Shostakovich 5 this season in Atlanta and I really look forward to hearing more.

May 17, 2020 at 02:14 PM · When I buy bananas for my family there are always one or two left at the end of the week. We eat tons of fruit so it's always been hard to get quantities exactly right, and with bananas people are fussy about how ripe they are.

At the end of the week, I mash the uneaten/overripe ones, store each mashed banana in a plastic container, and thaw as needed for recipes. You have to freeze them right away or thaw them immediately before use (microwave 45 seconds) or they will turn black.

Mostly we use frozen mashed bananas for pancakes, and we have them every Sunday with rare exception. I make my own pre-mixed dry ingredients "on scale" every six weeks or so, and in addition to bananas I include walnuts and chocolate chips (but then we do not use any syrup).

Another good thing to have in the pantry even though its not super environmentally friendly is individual applesauce cups. When I want to make my banana-walnut-chocolate-chip pancakes and I don't have any bananas (such as has happened during the COVID-19 scare), one of the applesauce cups replaces one banana. My wife uses them in baking fairly regularly too (e.g., in cakes and brownies).

I have never heard of Karina Canellakis before but I am thrilled with her success, as women are underrepresented on the podium. But when I saw her picture in this thread and watched her video, I was kind of wondering how someone who looks like they're about 20 years old gets to be a conductor! Thanks again to Desiree for bringing us these fun recipes and introducing us to all her amazing violin friends!