May 12, 2020, 1:22 PM · It is hard to believe we are at Episode #20 already, so to celebrate, we have the Chen Family with Robert leading the show. I have known this incredibly talented family for years and between all of of them, I could fill up this blog with an endless list of accomplishments! 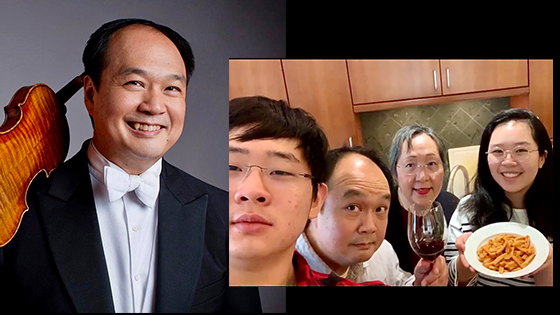 We will start with Robert Chen, who has been concertmaster of the Chicago Symphony Orchestra since 1999, where he has been a featured soloist with Riccardo Muti, Pierre Boulez, Bernard Haitink, Christoph Eschenbach, among others. He gave the CSO premiere of Ligeti’s Violin Concerto, Carter’s Violin Concerto, and Lutoslawski’s Chain Two, as well as the world premiere of Augusta Read Thomas’s Astral Canticle. Robert also enjoys a solo career and is an avid chamber musician having performed with Itzhak Perlman, Pinchas Zukerman, Yo-Yo Ma, Lang Lang to name a few….

And finally, Noah is a budding cellist at the Juilliard School, and he was the winner of the CYSO Concerto Competition.

I could go on, but I am getting hungry! So let us enjoy this Fabulous Foursome's "Chen’s Bolognese Sauce"! Be sure to watch through to the blooper reel at the end!