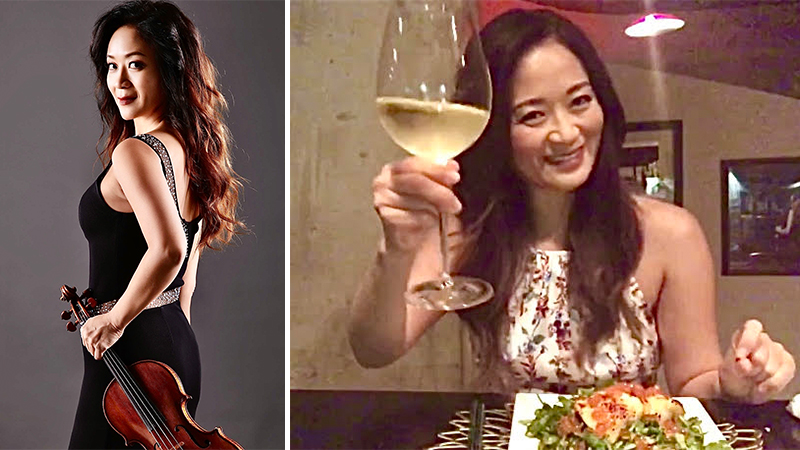 Chee-Yun has performed with many of the world's foremost orchestras and conductors. She has received exceptional acclaim as a recording artist since the release of her debut album of virtuoso encore pieces in 1993, Vocalise. Her recording of the Penderecki Violin Concerto Nos. 1 and 2 on Naxos was acclaimed as "an engrossing, masterly performance" (The Strad) and "a performance of staggering virtuosity and musicality" (American Record Guide).

In addition to her active performance and recording schedule, Chee-Yun is a dedicated and enthusiastic educator. She gives master classes around the world and has held several teaching posts at notable music schools and universities. From 2007 to 2017, she served as Artist-in-Residence and Professor of Violin at Southern Methodist University in Dallas.

Today she brings us her Arugula salad with rice and salmon roe caviar. Many thanks Chee-Yun for this delicious recipe !

I remember putting a recipe onto Facebook that included sesame oil. One of my friends, who is Korean, saw that I was using Japanese sesame oil so she sent me a bottle of Korean sesame oil -- implying that it was better! Well it was very good sesame oil, I had to admit.

If you are serving this salad family style, then you need to mix it the way Chee-Yun is describing. If you are plating it in the kitchen, then you can do it in layers (separate the arugula and put it on the bottom) and then add the rice mixture, then the fish, top with the seaweed salad, and it will look more elegant.

Also if you are using red pepper flakes as she recommends, most people prefer such a strong flavor to be blended better into their food. I suggest using just a pinch or two of Aleppo pepper or Korean red pepper and putting it in the steamer with your rice. Set timer for 10 minutes and stir just once at that point. (I do the same to make saffron rice in the steamer.) Otherwise probably it's better to use just a bit of cayenne if you are just mixing it in at the end.

I love salmon roe, but they're very expensive. I would probably substitute nonpareil capers.

April 15, 2020 at 08:50 PM · I do not love salmon roe. I tried really hard to like both salmon and sturgeon row when I was experimenting with being a snob, but I would now suggest substituting a rack-o'-ribs. :-)

Ashley Rescot, hope you and your family are well too and look forward to seeing you on your future Dallas visit!

Paul Deck, thanks for your tip! Next time I plate this dish, I’ll try your way!

David Burgess, May I recommend you to try trout roe instead of salmon roe? I totally understand that you might not love salmon roe and it can be a bit overwhelming for some people but you’ll find trout roe to be mild in taste but perfectly salty enough to add wonderful flavor!