November 27, 2022, 9:32 AM · Last night I finally watched the TwoSet Violin's Four Million Subscriber Concert, which they held with the Singapore Symphony Orchestra:

Here's the video concert livestream - it is cued up to start with TwoSet.

I’ve been watching TwoSet for roughly five years now, first on Facebook, and then subscribing to their YouTube channel. They’ve quickly grown a massive following on the platform, which is well-deserved. Not only are they able to make funny videos of classical music for entertainment and education, they are both genuinely excellent performers.

Thus, every time they reach a subscriber milestone, they take turns playing a big concerto. For two million, Brett played the Tchaikovsky, and for three million, Eddy played the Sibelius. In both of these cases, the person not playing the solo part would play an orchestra reduction on a single violin. This worked well with their duo appearance, but it doesn't compare with the incredible opportunity they were given for their four million subscriber concert: Brett performing the Mendelssohn Violin Concerto with a full orchestra!

Teaming up with Tarisio to procure two gorgeous Golden Age Stradivarius violins from 1708, as well as the Singapore Symphony Orchestra to accompany them, Brett and Eddy played an incredible concert. The concert was livestreamed from the Singapore Victoria Concert Hall, with beautiful camerawork and captions describing the pieces and events.

One unique thing about the livestream was that we could see them getting ready backstage, as well as the orchestra warming up and the fans checking out the special T-shirts they could buy or posing by the promotional poster with the duo and golden balloons. It’s been such a long time since I’ve last seen a concert, in-person or livestreamed, so this helped elevate the experience for me, bringing me back to all the concerts I used to attend while in college. I loved seeing the interactions between the scenes as well, such as the orchestral musicians congratulating Brett after his piece.

After the orchestra introduced the concert with the Overture to Mozart’s Marriage of Figaro, Brett entered the stage with the 1708 "Empress Caterina" Stradivari violin. Eddy - wearing TwoSet's Mendelssohn sweatshirt - joined Brett onstage as well, to help warm up the crowd. It wouldn’t be a TwoSet video on their channel without a bit of banter! Eddy even pranked Brett at the start, having the orchestra play the opening of the Bruch Violin Concerto - I wasn’t sure if Brett knew about this or not with some forceful shaky bow, but either way, this is definitely how I’d picture their style in a "serious" classical concert.

Then, the Mendelssohn - quite gorgeous! Brett got into it right from the start. All of the practice on the crazy octaves (which, of course, he’s shown off in other videos on the channel) definitely paid off for an incredible first section with the solo violin. One of the moments I loved about the first movement was the clever transition from the cadenza (where the soloist is playing string crossings - one of my favorite techniques to utilize!) - which becomes the accompaniment as the orchestra introduces the first theme in the recapitulation. I liked the controlled crispness that Brett brought to this moment, and how he calmly continued it in the background, allowing for the melody to come forth before he took the spotlight again. Brett absolutely brought his playful side for the finale, with all the staccato up bows seeming to be effortless under his bow. Seeing the SSO's wonderful conductor giving Brett a hug right when he finished made me smile.

After that, Eddy joined Brett with the 1708 "Regent, Superb" Stradivari violin. They discussed how both violins were made in the same year, and how perfect it was for them to be heard together in a set (a "Two-Set," if you will!) for the Bach Double! 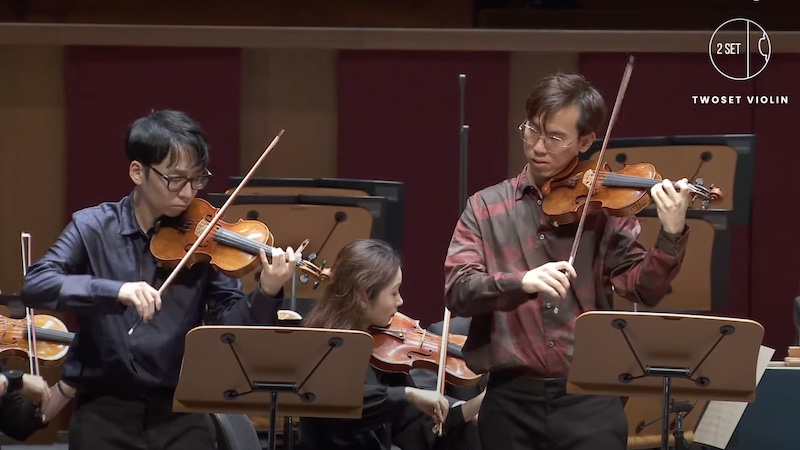 The two of them feed from each other’s energy well, having played together in concerts and in hundreds of videos. Just little things, like seeing Eddy expressively lead himself or Brett in with a little gesture when one would come in after the other in the first movement; or just enjoying how these silky sounds would blend together in the slow movement. It was great to hear them play together in this setting with the strings and harpsichord behind them.

Finally, one more secret piece not listed in the program (which was the YouTube description) - Eddy playing Paganini’s "La Campanella" with the orchestra! (I've cued it up right here):

It was something he prepared just a couple of weeks before the concert (and it's also the subject of their latest parody music video - Paganini 'Sell out'). For me, it brought back the video I believe I wrote about on this site he did explaining a very difficult piece by Paganini as he tried to learn a series of grueling techniques. While this is nowhere near that difficulty, it’s still five minutes of fast virtuosic technique in a different style than Brett’s giant concerto. What made the audience laugh was when Eddy was playing an artificial harmonic F#, mimicked by the triangle, as they were both similar in timbre. It was a clever orchestration trick that Eddy really played with, possibly knowing how his audience might react, with a knowing grin. This was a perfect way to end their concert!

Brett and Eddy came back on one last time to announce the 2023-2024 World Tour. They explained that it’s been five years since they last played in Singapore. Since they had to shut down their tour plans due to COVID, it will be exciting to hear what they’ve got up their sleeves. I would love to see them in-person on a stop near me and write about my experience seeing them live!

I’m hoping to start listening to more classical music concerts again, and perhaps attend some live ones, too. I’ll definitely continue to blog about my experiences as I’ve always done on the site. In the meantime, I’ve got some exciting personal musical projects that are nearing completion or are finished, and I can’t wait to share some of those in the next several weeks around the holidays. For now, thanks for reading, and don’t forget to keep on practicing 40 hours a day!

November 28, 2022 at 07:17 PM · I thought his interpretation was very beautiful, and better than at least one soloist I've heard live. His sound was very nice, and I liked his tempi and phrasing.

November 28, 2022 at 10:44 PM · I loved this Mendelssohn interpretation too, by Brett, the orchestra, and the conductor, and it definitely sounded like a Strad!