December 30, 2021, 10:58 AM · 2021 has been a year of notable anniversaries for me, and I’ve been enjoying celebrating some of them with tribute videos or writings. Today, I’d like to talk about the two films that have had a large impact on my musical life: Harry Potter and the Philosopher’s Stone (November 2001), and The Lord of the Rings: Fellowship of the Ring (December 2001). Although I can’t say I’ve grown up with either of these films from the start, the moment I got into their scores, I fell in love with both of them and their respective series. 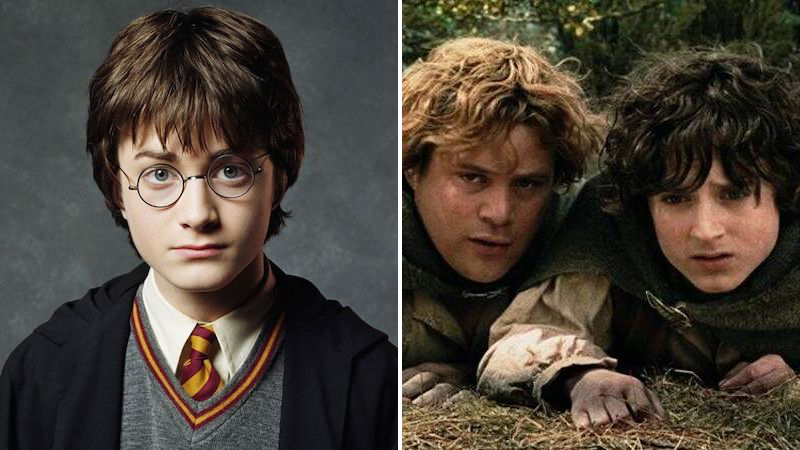 I got into the Harry Potter series a bit late into my childhood, but once I did, I was immersed with the world and characters J.K. Rowling told in the books. The final film released in 2011, as I was really beginning to fall in love with the music world, and I went back through the series’ scores many times since.

John Williams was a strong start for the series, and he produced another wonderful score - “Hedwig’s Theme” alone has become such a promotional image of the series! Heck, I keep seeing that the violin part of “Hedwig’s Theme” is used as audition material for major orchestras!

The celesta was also a large part of not just this track, but the soundtrack as a whole - it has such a magical sound that I have come to adore. Williams’ colorful orchestration blends so well with Chris Columbus’ bright colors of the film. It’s hard to not smile at this combination! I love the “Dragon Alley” music - it’s so “Petrushka” in a way, really capitalizing on a chamber music setting as if there is a band of wizards actually playing here. And, of course, seeing Hogwarts for the first time, and the magic it all contains… Williams really took from previous films like E.T. to capture Harry’s magical world.

Honestly, this was the perfect score to introduce the world to Harry Potter on the big screen. The music never got too dark or gritty (even with the Voldemort scenes towards the end); other composers and directors down the line would explore that route for the future films. The first film is all very innocent and light to capture Harry’s curiosity and wonder at this new world he’s in, and the score perfectly matches this. The medley “Harry’s Wondrous World” is a great summation of all the work Williams put into leitmotifs for characters and events. I believe this (and the ending music of Sorcerer’s Stone) was put in during the final scene of Deathly Hallows Part 2, something I definitely picked up on in 2011, and was the perfect, nostalgic way to end off the series.

A few final unrelated thoughts: A local orchestra to my undergraduate collage, the Quad City Symphony Orchestra, has done a few Harry Potter in Concert events! They started after I left Augustana, but I love the idea of this music being played live as the film is happening in the background. You can really get a sense of the colors and magic Williams put into this score, and I hope I’ll be able to see a performance live one day by any orchestra. And finally, I love Rowling’s idea of how the wand chooses the wizard. It’s such a wonderful parallel to us string players going to music shops to try out instruments - the violin chooses the player! (Thanks for that thought Laurie! :P)

I remember being introduced to Howard Shore’s work in 2011, when I wrote up my own piano arrangements of tracks from his score for Hugo. I loved the setting of Paris and use of the clock tower throughout it, and learning how Shore’s French idiom highlighted that atmosphere. As my family was getting into reading The Lord of the Rings books and we started watching those films, I then got a sense for how incredible he was as a composer. This score was rich and epic, really capturing the essence of high fantasy through its dense Wagnerian approach. Shore’s many leitmotifs help enrich Tolkien’s world, and each culture having its own orchestration choices helps colorize and differentiate parts of the world.

I was always partial to the big fiddle solo for the Shire theme. To this day, it brings to mind springtime, and a safe forest haven full of nature and beauty. The famous Fellowship theme grows throughout The Fellowship of the Ring; you hear its humble beginnings as a small side-gesture in a horn part, up to the full throttle orchestra playing it heroically to close out the movie. The absolute genius behind this score cannot be overstated. I once was working on a film I called “The King of the Aliens,” of which I took inspiration from this score; while I’ve since moved in a new direction harmonically, the leitmotif has always stayed with me and will probably forever be a staple of my music. For me, that started with Howard Shore’s Lord of the Rings score.

I received Doug Adams’ book specifically on the music of The Lord of the Rings (The Music of The Lord of the Rings Films. It goes in-depth with all the leitmotifs and Shore’s thoughts, and even discusses some of the non-conventional instruments they used for the film (anvil, Hardanger fiddle, etc.) and summaries of some of the scoring sessions for the films. I always got a kick out of reading those, and it helped me fantasize a world where I would be conducting my own film score one day when that was my biggest dream in high school.

Additionally, finding The Lord of the Rings Symphony on YouTube (a cut commentated version with thoughts from Shore, but where you could see the orchestra in-concert, I believe from 2004) always gave me excitement for practicing violin.

I loved how they incorporated sketches into new parts of the score, and you could really feel like you were watching the films again. I think there are plenty who would agree Peter Jackson’s Lord of the Rings trilogy is one of the greatest pieces of media ever, and it’s amazing how much that high-fantasy world, story, and epic score has made me fall in love with that genre and music as a whole.

I would definitely rank both John Williams and Howard Shore high on my list of favorite film composers, and as a composer myself as well as a violinist/pianist, having played and written medleys for both scores before, they’ve always been there to inspire me to practice hard and develop my own craft. Watching the films are fun, but sitting down and actually focusing on the scores in isolation really showed me as a young composer some ways to write for the orchestra - before I discovered my favorite composer, Maurice Ravel, that is! I will cherish both of these series for the rest of my life, and I can’t wait to see younger generations checking them out for the first time going forward.

December 30, 2021 at 07:30 PM · I have long been, and remain a huge fan of Williams' score for Prisoner of Azkaban. I kept hoping he would be chosen to do one of the later scores, and I groused quite a bit about Patrick Doyle's and Nicholas Hooper's efforts.

But then Alexandre Desplat happened. I was very familiar with and appreciated the comparative virtues of his work prior to Deathly Hallows 1. But those efforts did not lead me to hope for much in comparison to Williams' work. Then Desplat did something in perfect parallel to my experience of Shore's work on Lord of the Rings: he created an outstanding score that made expectations based on his prior work completely irrelevant.

I had already often wondered what thought process lay behind not choosing Williams for the later Potter scores. I had considered that the argument could be made that his first score had been a bit of a potboiler and perhaps not entirely in keeping with the picture Rowling and co. wanted to paint. Desplat's work made the complete argument for me in this regard, to the point that not only have I had to admit that--much as I still love his music for Azkaban--Williams never really captured the "Englishness" of the Potter universe, but also that Hooper did in a way that elevates his work, as a film score, above the quibbles I had with its simplicity.

December 31, 2021 at 09:29 PM · You know, I really can get behind this sentiment. As much as I've seen people complaining about the "Hollywoodization" of Harry Potter (I believe that's a video title I watched a couple years ago) and I get that, I think the overall direction of the series was quite logical. Desplat's score was a darker, somber take that fit with a literally darker film, and it did a lot of things very well. It's not my personal favorite of the series, but it's a fitting end to it.

Your point about the "Englishness" is an interesting one as well. I really hear a lot of Williams' Spielberg films like E.T. in the first Harry Potter - not necessarily a bad thing, but it's clear he was exploring new directions in Prisoner of Azkaban, and that really helps separate it from the innocence of the first two. I can see why you like it so much - I really should listen through it again! Maybe I'm unfairly lumping it in with the first two (all Williams) when really it should be on its own, musically.

Thanks for the great discussion!