August 2, 2020, 10:19 PM · The BBC Proms 2020 have been under way for a few weeks now, and this year the British festival has taken a different approach due to the pandemic. I know the team had been hurriedly trying to plan the Proms this year, hoping for the best with the virus. While they weren't even able to publish the Festival Guide, they did come up with a plan. 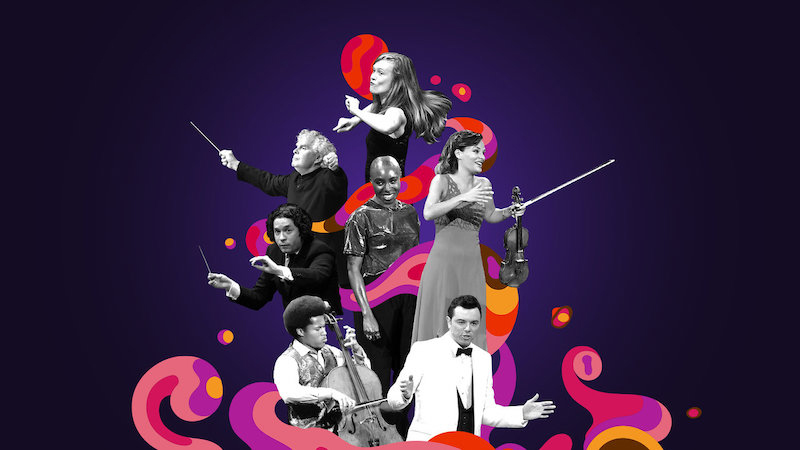 For the first six weeks (starting July 17), they are broadcasting on Radio 3 highlights from past Proms seasons from the BBC's archives, and sharing some of the best concerts with us. For example, a concert I listened to this morning was full of musicals by Sondheim to celebrate his 80th birthday, from the BBC Proms 2010. Last Sunday, I listened to the Hollywood Rhapsody concert of film music of the Golden Age, from the BBC Proms 2013 season with the John Wilson orchestra, and that brought me back to my Chaplin piano score project from the same year.

For the final weeks of the Proms (starting August 28), they are planning to open the doors of the Royal Albert Hall for live performances. Looking at the BBC Radio 3 site, it seems many concerts have not been posted yet, and we'll have to wait and see what happens. For me that won't affect anything other than getting to tune into some newer performances from the festival this year.

Inspired by the Proms' delving back into their archives, I thought it would be fun to leaf back through some of my past blog posts (and check in my written journal) for some of my personal highlights from the Proms that I have heard in the past.

I absolutely love the Proms, but I certainly haven't listened to every single concert. So ultimately, this will be more of a personal history. Of course, you can enjoy the official highlights with the BBC Proms 2020 season that is happening now. I still thought this would be a fun little entry, and I'll post as many videos as I can!

In March 2012, I didn't even knew what the Proms were, but I was pretty obsessed with film music. Finding this concert served as a major introduction to the orchestra for me. I loved seeing the pianist in the back, surrounded by a grand piano, celesta, and digital keyboard. I also loved seeing him play in combination with the violins (in "Hedwig’s Theme," above). I didn’t listen to every piece back then, but this fueled my excitement for film music, right alongside "The Lord of the Rings Symphony" by Howard Shore.

My first introduction to a Doctor Who concert was in 2006, and I know the actress who played Martha Jones spoke at the first Doctor Who Prom in 2008. 2013 was the 50th anniversary of the BBC’s hit show, so of course they wanted to do something special. I listened to the whole concert on Radio 3, even though I didn’t plan to do so (I really was into the popular orchestral music at the time!). It’s been so long since I’ve last seen Doctor Who, but Murray Gold’s work is fantastic, and it was a joy to hear. Plus, in the interval, they discussed the use of synthesizers and ‘60s electronic equipment to produce the famous sounds of the sonic screwdriver and TARDIS moving, as well as the music. That would be a fun section to revisit today, with the electronic music classes I’ve taken recently.

Ravel at the Proms:

Being a Ravel fanatic, I loved discovering Ravel at the Proms! These videos helped me discover even more of Ravel’s music in late-2014/early-2015, alongside the various score-videos on YouTube. Seeing the piano shining bright at the front of the violins brings back fond memories of enjoying this music in the mid-morning in the winter. And seeing Barenboim’s take on conducting Bolero is fantastic - he only butts in for some expressive purposes, allowing the snare drum to be the true conductor of the piece.

This concert inspired to write “Birds of Prey” in 2014, a 37-minute tone-poem for full orchestra that I was very proud of composing at the time. Looking back on the piece, it was a nice way for me to experiment with various sound worlds that I had been discovering that summer (i.e. Stravinsky, Debussy, Ravel, etc.) from the early 20th century. This piece has shown up in so many of my music classes in college that I feel I know it fairly well, with plenty of notes in my Dover score, including how to conduct the work.

When I first watched this particular performance at the BBC Proms 2013, I enjoyed Tom Service’s introduction to the piece, which enthralled me far beyond pure diatonic languages. And this is where I am today compositionally, if not slightly returning to that diatonic world. I plan to spend this academic year (perhaps my final one) at UIUC, experimenting with going to the opposite end of the spectrum (or at least a new perhaps atonal direction…?) starting with a string quartet - but that’s a topic for another blog post…

I listened to this concert on a walk around Augustana's campus in the evening, taking notes on my phone during the interval so I could write them up for my blog post afterward. (This was one of the later concerts that season, so just around the start of the academic year.) I got to know John Wilson very well from this concert, and have enjoyed seeing him speak and put together these more ‘orchestra pops’ concerts.

If the First Night of the BBC Proms sets the mood for the summer festival season, the Last Night is the big, festive British party where everyone brings out the flags of the country they’re from (so mostly British), the conductor and stage get all jazzed up, and it’s a big ol’ party. I love all the final famous British tunes they play every year, a tradition started (I believe) by Sir Henry Wood. I also love seeing the different world premieres during the first half of the event, with the program summarizing topics and ideas from the season. 2016 was for the Rio Olympics, so that was celebrated musically here as well. I absolutely love the links with music that can be composed specifically for this particular concert in the festival that links it to events happening in the real world. Sounds like some pieces some colleagues and I are (separately) writing at the moment…

Other memories include the 2011 Spanish Night, which I remember as a very colorful concert with lots of French composers alongside Spanish. And I didn’t mention any of the concerts I saw this season from the archives, such as one from 1989 with a Knussen firecracker, Debussy, and others.

This season, my favorite piece so far is actually a rare brand-new piece: Beethoveniana:

This was created with more than 300 musicians from five BBC Orchestras and the BBC Singers in lockdown, and two dancers (in isolation). It was mixed well, taking excerpts from all of Beethoven’s symphonies, merging them together through a blending of styles and sound worlds for the orchestra. Definitely give this one a listen!

Thanks for reading, and maybe you found something in here or in the links below that interests you! The Proms are a great summer festival, and I’m starting to wonder what other classical music festivals I should be keeping my eye on. I know of a few, just haven’t really tried anything else yet! Hopefully one day, post-pandemic, I can actually attend the Proms and other festivals - that's a bucket list item, for sure!

For more on the Proms, check out the Wikipedia article here - The Proms - British concerts - Wikipedia

And here’s the official site on the BBC - Proms

Listen to concerts from this season.

August 4, 2020 at 02:51 AM · What a wonderful retrospective, Joshua! I particularly enjoyed "Hedwig's Theme" from Harry Potter. I still remember reading those books to, and with, my son.

August 5, 2020 at 10:23 PM · Thank you!! I'm currently reading from the Illustrated Editions of the Harry Potter books. It was a big part for me growing up and the music is something I go back to!