May 1, 2021, 8:38 PM · The great psycho-linguist George Lakoff once said something to the effect that any time he came across anything that was regarded as common sense he knew there was something to be deconstructed. Or, as the great buffoon Buri once remarked, "The only function of an adage is to add-age." One of the directives we meet all the time in the violin world is "Practice this for a few weeks and you will notice an amazing difference." Nothing wrong with the idea per se; however, listening to a recent podcast interview of Simon Fischer I realized that it might be worth a little consideration.

During the hour long interview (mentioned in the discussion section) Simon’s book Warming Up became the focus of attention. The charming, albeit a little gushy, interviewer remarked that even after a few weeks just the first exercise had an amazing effect on the left hand. At this point Simon gently chided her to the effect that the exercise had an immediate effect on the left hand, causing the interviewer to do a little quick stepping to get back on track.

Simon went on to add that he wanted to feel the result of any exercise within 20 seconds or so, or he did not consider that exercise to be of value. This must have caused a considerable amount of eye-raising among the many listeners and even engendered the quickly suppressed notion that Simon might be a tad eccentric and too heavily into instant-gratification when it comes to his own violin practice. Actually, this is very far from the truth. In fact, what Simon is indirectly showing us is an extremely important point that modern studies of how the mind works have a great deal to say about. 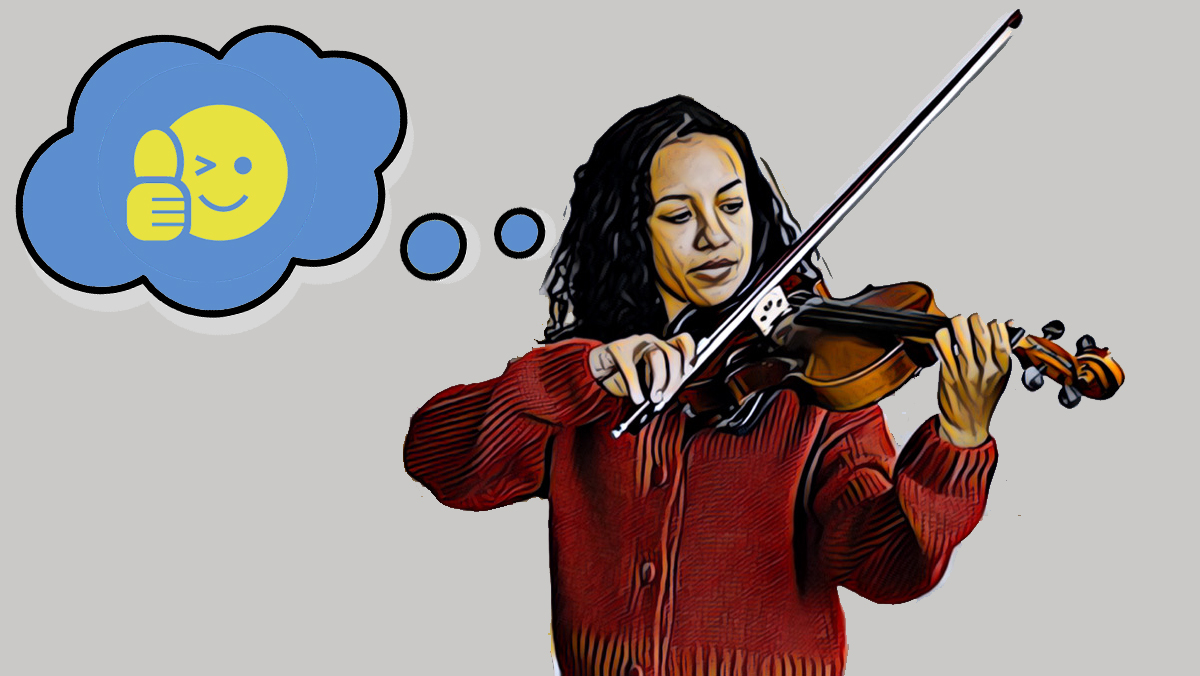 One of the most significant discoveries of modern psychology is, in my opinion, the notion of "Psychological Capital." This has spawned a whole new field of research which is generally referred to as PsyCap. PsyCap theory argues that humans have a certain amount of psychic resources such as hope, reliance, optimism and efficacy. These are not actual traits or tendencies, but rather states. This distinction is important because in the field of psychology a "state" can be the object of study and is under the control of the individual.

Furthermore these "states" correlate extremely strongly with not only our performance (on the violin or whatever), but with the degree of satisfaction one actually gets from the task in hand. The first implication of this is that we can increase our psychic resources (capital) by looking at things differently. The second is to understand that our expectation of "how things are going to go" is more important than how things are actually going. In other words, these expectations are actually moods. If we are in a good mood things will go well. If we are in a bad mood they won’t!

How does this rather long winded discussion pertain to violin playing? Well, it is actually quite simple to change our expectations (mood) about the future by constantly receiving unexpected rewards. (Can you see how this might relate to Simon’s point now?)

The psychologist Mihaly Csikszentmihalyi states, "PsyCap is developed through a pattern of investment of psychic resources that results in obtaining experiential rewards from the present moment while also increasing the likelihood of future benefit." In short, our violin practice must be structured to produce significant rewards more or less straightaway - and also, increase the probability of future reward.

Thus, to do the best possible violin practice, we need to have psychological momentum triggered by constant rewards (yes, within 20 seconds.) In the same way, modern theorists are pointing out that in the work place people are frequently lumbered with big projects with few rewards except near the end (possibly). As a result, people working on large scale projects are often rather grumpy.

On a slightly different topic, Simon mentioned that when he had a concerto deadline, he often spent most of the day practicing things like tone production exercises and barely touched the work except at the end of the day. Anyone who want to write this off as classic procrastination is welcome to do so, but it is actually a different kind of procrastination that is actually very valuable.

What classic procrastinators do is minimize the value of secondary tasks such as technical work and attempt to force themselves to take on the main challenge. This causes severe stress and achieves nothing.

By contrast, what we actually learnt from Simon was that procrastination is actually a valuable psychological tool when used correctly. The negative feelings towards the major task in hand actually create energy that can be used to work on secondary level tasks of value. This is a very effective way of practicing indeed!

The underlying principle behind all these things Simon described is that for us violinists, the most important source of power for our practice is emotional energy, and the way we harness it may not always be the most efficacious.

I guess his idea of instant gratification is not so crazy after all!

according to a video I just watched the 78% mark is about right for chocolate. you still get an unhealthy jab of sugar but lots of benifits from the actual substance.

Back to the violin? What Buri promotes is just what a good Suzuki teacher does: obtain an instant change or improvement, to be confirmed during the weeks practice: bite-sized challenges so that every note is satisfying..

For example, scales should be like rainbows: not "art" but beautiful in themselves.

Life is too short to do ugly things twice running, on purpose.

May 4, 2021 at 11:06 AM · Adrian - I like your democratic view of chocolate! I had some 95% inflicted on me recently: worse than eating cooking apples! Going back to the violin: I shall transcribe some of your wisdoms into my music notebook, and (more importantly) will try to get them into my practice, in search of the 'velvetly tone'.

May 4, 2021 at 09:12 PM · Thank you, Buri. Another great contribution to my thoughts-of-wisdom collection. That's exactly why I like etudes, in general. They allow you to focus on one specific thing at a time and not the whole bunch of everything-at-once. Hoping for development while practicing months over months only on one single concerto is a really bad habit some teachers adapted from their students (or from their own student days?). It's better to tackle a problem in the technical practice lab and the come back with a solution. More immediate rewards, and no repertoire sickness.

May 5, 2021 at 02:06 PM · Related to this discussion is how much effective practice should one be doing, bearing in mind that such practice is, or should be, a very focussed activity.

A day or so ago I came across an article that discusses that very point:

Basically, the writer is arguing that effective focussing tops out at 4 hours, after which the brain becomes less effective. I can attest to that in my former career as a patent attorney when 3 or 4 hours per day was as much as I could manage when drafting a patent specification (a very focussed activity that won't tolerate interruptions), after which I would find other jobs less demanding to do for the rest of the day. A colleague, who had worked in a busy private practice, told me that the rule in the firm was that important client-chargeable activities such as drafting should not be more than 20 hours per week by an individual, for it had long been known that regularly exceeding that limit resulted in a reduction in the quality of the work.

Now apply this to practicing a difficult instrument such as the violin . . .

indeed Trevor, I also apply the Pomodoro technique to violin practice. I think it is one of the hardest skills associated with the violin top learn how to really focus, stop repeating stuff add naseum and do more in less time.