We live in a fractured, damaged world where it is sometimes hard to understand why people think the way they do, or do the things that they do. One of my favorite books is Flow by Mihaly Csikszentmihalyi. His argument is that when a person squanders their energy on things that have require no expenditure of psychic energy the person is no longer able to control their thinking or behavior in a rational way and become open to any kind of dangerous programming.

I believe this is one of the reasons that those in power fear music and the arts in general. They (whoever they are) feed us a gargantuan diet of entertainment that poses as art, but requires no true involvement or effort. Violinists and musicians in general pose a true threat because whatever level we are at, we choose to govern our own lives by incremental challenges that stretch our thinking and sustain our ability to question.

Bach is universal because his music personifies that threat of rationality. It has stood the test of time and varied usage by any number of people in so many fields of artistic endeavour, never once yielding a solution so definitive that there is nothing left for anyone to do with it. Which is why I am thinking about the E major Preludio... 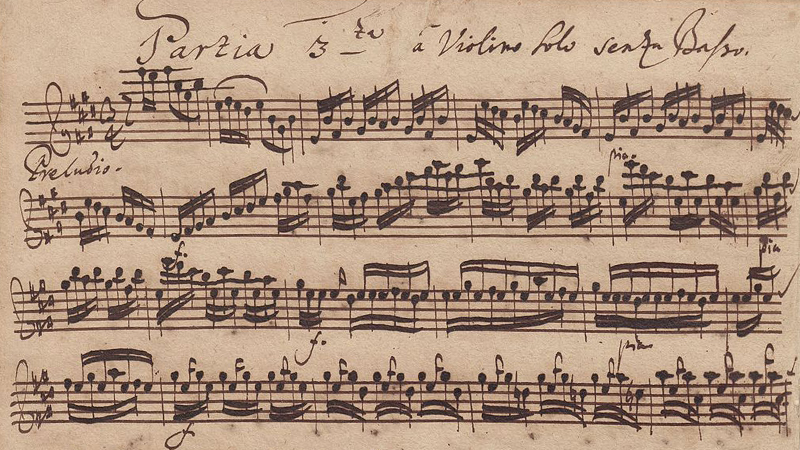 It’s a strange piece that evokes endless discussion about the notorious ‘figure eight’ (or whatever you want to call it) passage where even the greatest violinists on occasion seem to lose a step at the end and then get back on track somehow. Much time has been spent explaining the reason for this phenomenon and some fantastic violinists on this site have generously offered a variety of practice methods for getting it even and under control. I have nothing more to offer on this topic.

However, I was very interested to see the Youtube video by Nathan Cole Bach on the Road, aimed at this work. Nathan generously teaches the violin for free and anyone who doesn't devour what he has got to offer is just plain bonkers.

I was however, very struck by his initial commentary about the Preludio. Something to the effect that this is a real virtuoso showpiece that has to be played brilliantly. I’m too lazy to check his exact words, but he makes no bones about his interpretative approach and it is not hard to see where he is coming from. Another point to bear in mind is that he is ‘brilliant’ so why not? Great Bach indeed!

What, however, happens if one chooses to think of this work as an amiable stroll in a sunny park, occasionally stopping to look at a tiny flower, nesting in the shade of a magnificent tree? In real terms, instead of playing it fast and (with the exception of players such as Nathan) not really getting it quite under control, why not play it slowly? At the very least, can’t we get rid of the ‘horrible happening’ where a usually musical student plays the opening well at a reasonable tempo and then suddenly increases the speed exponentially in this notorious section? At least follow the logic of playing something difficult a little slower rather than a different tempo to the whole work....

I have long adhered to the brilliant school approach but, I was very surprised when I opted for a saunter the other day. During my walk in the park, I was struck by how half-decent bowing could be achieved by the ear if one calmed down and slowed down enough to actually be able to hear what was coming out of the instrument. I wonder if we really do have to spend so many tortuous hours practicing sooo many rhythms in the hope it will become right when we could just let the sound guide us? In the case of Bach I often turn to my artistic mentor, Joseph Szigeti, and was relieved to find that he does indeed stroll around the woods inhaling the air. Possibly we have my other mentor Heifetz to thank for this abundance of brilliance. Who knows?

But these are questions violinists can chew over and retain our sanity, rationality and deadly essence.

To my mind, another candidate for "the walk in the park" is Paganini's "Moto perpetuo" which far too often is used as a vehicle for virtuosity for its own sake, and chasing world records to see who can play it in the shortest time, ignoring the fact that Paganini specified its speed as not Presto but Allegro, thereby inviting the player to explore the detail within the music.

I wonder if the notorious passage in the Preludio that you referred to is more suited to the bow of Bach's time (the Baroque bow) rather than today's bow. I must explore that.

With reference to the opening paragraphs of your blog, my personal experience, albeit at a low level, of the attitude of those in power to music dates to when I was at school. I was not allowed to take a school matriculation exam in Music ("O-Level" in those far-off days but now known by a variety of other names) because I was in the science stream. Nevertheless, I was allowed to take Art. The ruling was doubtless a small thing in the grand scheme of things in the eyes of the powers that be, but that music matriculation exam would have been a walk in the park for me at that time. The logic of the ruling still eludes me.

March 15, 2021 at 01:35 AM · I haven’t heard Cole’s interpretation, so can only go on the words. To me, however, the piece strikes me as a very festive invitation. Bach used it to kick off Cantata 29, in an arrangement that really ought to be considered by wedding planners.

With the violin, my image is of an auctioneer or carnival barker. Exuberant, but also able to lower voice and change mood while discussing the diverse marvels in each exhibit found in the tent behind him. The AMAZING bearded lady. Acrobats who will make you lose your lunch. Etc. That doesn’t mean leisure, but does imply room to put a bit of light and shade into the proceedings while still goosing the adrenaline.

As for the bow, it does feels different as you move back with hardware, although opinions differ as to what the effect should be. Joseph Silverstein found it impossible to keep the Baroque bow on the string, leading to a spiccato somewhat out of fashion after Sarasate’s time. I don’t mind that, but suspect there are other options.

March 17, 2021 at 01:17 AM · Having heard the organ version, I've always seen this prelude as a sort of fanfare (My brother sees the beginning of the C-major 'Cello Suite in a similar way).

March 17, 2021 at 03:51 PM · That is a very unique interpretation of Flow. My understanding of Mike's book is that one reaches a state of enjoyable absorption, (in which distractions do not penetrate and time passes very fast) under conditions in which the skills of the individual performing the task and the challenges offered by the task well-matched. If challenges exceed skills, the performer of the task will become anxious. If skills exceed challenges, the performer will become bored.

March 18, 2021 at 09:11 PM · Bach's violin partitas were composed in the period 1703-1720, and Cantata 29 ("Wir danken dir, Gott") in 1731. The 6th Partita is in E, which Bach must have judged to be too high a pitch for voices, and which may have caused problems for the wind instruments, so Cantata 29 is mostly in D. In its opening sinfonia the organ obbligato (effectively the violin prelude transposed to D) is an organist's delight. The notorious violin passage that Buri discussed is very effective when you have a 2-manual organ on which to play it!

I must mention that the 3rd movement of Cantata 29 is an aria, in A, for tenor voice, violin obbligato, and continuo. In my opinion, this is well worth playing as a trio for violin, viola and cello.

Jocelyn, i I didn’t say that was the definition of flow per se. Your definition is of course 100% correct. But Mike what’s his name presents a wide ranging discussion in the book of the importance of flow and the kind of conditions or society we are living in that makes it an increasingly rare phenomenon.