December 23, 2020, 8:33 PM · I don’t really do much violinny stuff these days. I’ve got a garden that produces humongous amounts of vegetables, a beautiful wife and an iPad. What else does one need? Unfortunately I can’t stop practicing every day because that is what violinists do. A weird species to say the least... After more years than I care to count, I am basically down to two books which maximize technical practice within the most minimalist space. These are Simon Fischer’s Warming Up and the somewhat lesser-known Dounis Op. 23 "Fundamental Technical Studies on a Scientific Basis" or whatever. (I lost the front cover a long time ago. You can download a free copy from IMSLP.)

I think Dounis did himself and us a disservice when he implied they are for beginners. Although they are nothing like as challenging as The Artist's Technique, which can be quite daunting initially, Op. 23, if used well, has most all of what we need for left hand movement in it, if approached intelligently. (The exception is shifting long distances, for which you will need to go to elsewhere). 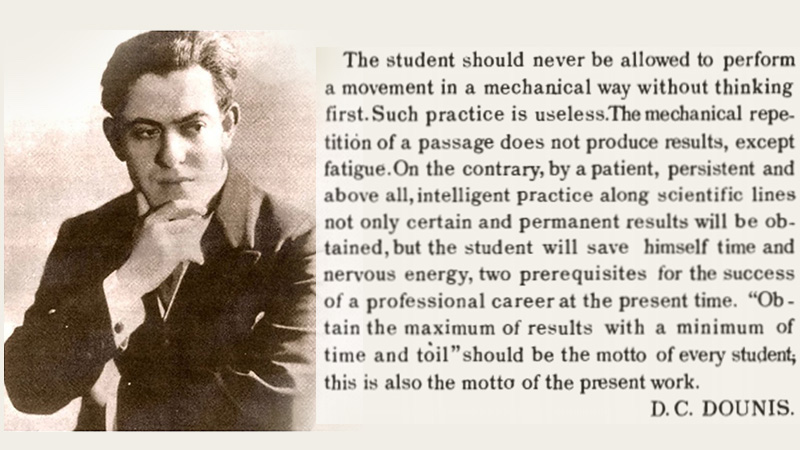 I think it is one of those books (like Kreutzer) which can exist on many different levels, perhaps rather like quantum physics. So I was delighted to find that Daniel Kurganov has, on his superb site, done quite an extensive coverage of this tome. (Unknown (Awesome) violin exercise by Dounis). Not only is it a joy to watch, but it spares me the trouble of having to describe it in detail or even mention basic practice concepts!

Just to note that there are three sections. The first is supposedly about "balancing the fingers" which I think is a very nice way of thinking about the left hand in an effortless sense that allows the fingers to strengthen in a very natural way. For a relative beginner, especially adults, the significance in terms of knowing the fingerboard is that the variations systematically teach finger patterns which correlates well with the most modern ways of thinking about left hand technique.

Robert Gerle for example, has written a book on how this is actualized in performance. For me, where it gets interesting at a more advanced level is in the area of vibrato. In Daniel’s video he talks about a very specific vibrato problem that can be found all the way up to professional level. That is, in transition from fast notes to longer units the vibrato does not kick in immediately thereby causing a loss of sustainability within a phrase. Of course this is absolutely right, but I approach the exercises from a slightly different perspective. My goal is actually to, at least psychologically, have the hand in vibrato mode throughout the whole bar.

I actually try to avoid thinking in terms of no vibrato / switch on vibrato. I will even go as far as to mentally visualize the hand balancing on one finger and vibrating around that finger. The sensation this kind of work evokes is unusual at first, but it creates an incredible sense of relaxation in the hand. In essence, if the vibrato is technically correct, then a continuously vibrating hand is actually the goal of this work. Try it and see how it feels. I am not sure, but I think I read an interview with a cellist about fifty years ago in the Strad that said Dounis actually advocated this constant vibration. I may have made that up so any correction welcomed...

The second set of variations is concerned with lateral rather than vertical movement. (If you like, small chunks of a chromatic scale.) Dounis makes the point that it is this particular movement which is extremely effective in creating not only independence of the fingers but also developing a great deal of finger strength. For me it is actually better than up and down practice, although in a way it combines both types of work. The basic failing of violinists when playing chromatic scales is ubiquitous: when sliding the finger up a semi tone, it is usually flat. When sliding down, it is too sharp. In other words, we don’t move the finger quite far enough in either direction.

I practice these units for intonation first using a hooked bowing, ie. two notes to a bow, repeating the second as the first note of the next stroke. After that I play it straight, except I don’t. I actually trill the sliding intervals over and over every time I land on to perfect the intonation and give my hand a hardcore work out. You can also practice these kinds of exercises in fifths (a la Rodney Friend) to push your technical level even higher.

The bowing section is self-explanatory, so I won’t address it here. Incidentally, Dounis writes with a straight face that these exercises should be played musically. Once they are well under control there is no reason why one cannot add crescendos and diminuendos and varying the vibrato speed. Imagine one is playing the slow movement of the Beethoven concerto. Mentally thinking different rhythm patterns that do or do not correlate with what one is playing is also possible.

Finally, in order to avoid being overwhelmed by all the possibilities try allocating a particular chunk of the work a specific day of the week. Color coding time is always a good excuse for not practicing!

BTW I took a closer look at the blurb on the Dounis which I have been assiduously ignoring and he does indeed advocate continuous vibrato. I believe his intention is to great the greatest possible relaxation of the hand by keeping the finger down as much as possible and vibrating. This is not possible without genuine relaxation and at the same time it helps one move towards that state. I’ve looked at a couple of demonstrations on youtube where maximum vibrato is being achieved by keeping fingers off the strings. I suspect this is actually not what dounis intended at all. Honestly speaking anyone can vibrate on just one finger. It isn’t where the subtle benefits of this work lies.

December 25, 2020 at 03:47 PM · Seriously Buri, you're like a V.com. legeand, lol! My earliest memories on here were multiple posts ending with "Cheers, Buri". And every so often some one will still mention you in a thread even now days.

Thanks for the update!

By the way, your blog on Dounis was great.

December 25, 2020 at 04:20 PM · I like to practice big shifts taking care to land on vibrato, especially for shifts high up on the e-string, and even when the note itself won't have time for much of a vibrato or is part of passage work. I find that it encourages me to keep the whole mechanism relaxed, and I wonder if Dounis wasn't getting at a similar idea.

December 25, 2020 at 08:56 PM · Interestingly there is also the reverse theory around, Christian: Somebody (I assume a chamber music coach but I do not remember the occasion) explained shifting to me about as follows:

The shifting movement is like the vibrato movement. You vibrate, you enlarge the movement somewhat, you allow your finger to slide, voilà your shift! I have kept this in mind and found it useful.

In a way it implies your "landing" on vibrato, I suppose but I have not before considered the after-shift stage.

December 25, 2020 at 09:18 PM · "Dounis writes with a straight face that these exercises should be played musically".

He is not the only one to suggest that of course; it seems to be a common place among violin didactics.

I suspect that this thing about playing exercises "musically" is a white lie, a somewhat clumsy attempt at sweetening them for students.

*I am talking about the scales we are supposed to practice. Scales can be music, just listen to the beginning of the slow movement of Haydn's C-Major concerto!

December 25, 2020 at 09:44 PM · Albrecht, I think of shifting, proper articulating and vibrato as all coming from a certain feeling of a relaxed hand, so when I practice a shift to land on a vibrato, I think of it as a way of checking whether my hand is relaxed, or if I'm tightening somewhere during the shift. If I can start a relaxed vibrato immediately at the end of my shift, it's a good sign for me.

So I can definitely see that these concepts go in both directions.

December 26, 2020 at 07:29 PM · I agree with Albrecht. Even though scales may not be music, practicing them can be enjoyable. I extract a kind of zen-like enjoyment from scales, and I always play a crescendo at the top of my three-octave scales, because my teacher assures me that it's good for my technique.