Greetings,
Well, it's official: Vanessa Mae is to represent Thailand in the Winter Olympics skiing events. No comment needed.

For some bizarre reason I teach one of the richest women in Japan. Although I am not completely clear about the mechanisms involved, this condition apparently leads to receiving huge quantities of luxury chocolates day in day out. Since she is not over fond of chocolate I tend to inherit said culinary items. Actually I am not a big chocolate eater either so it takes me about two days to eat a single Godiva mouth bomb.... I solve the problem by passing on the surplus to colleagues. Truly drip down chocolate economics works. 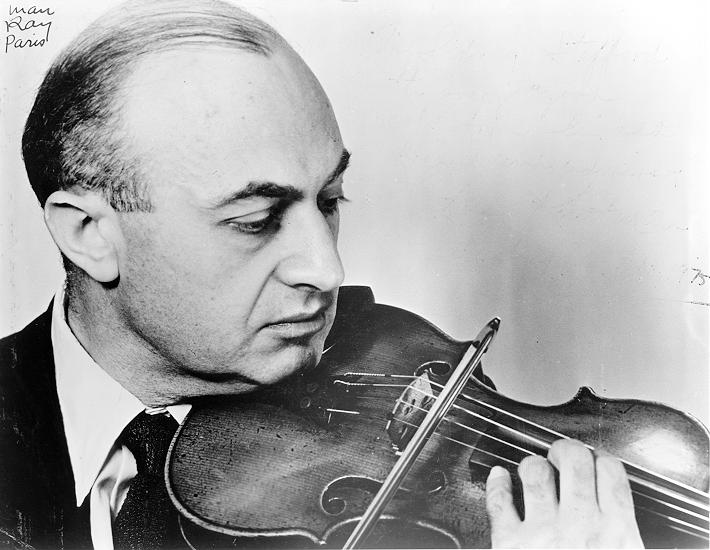 I mention chocolate because one of my favorite violin sounds of all time is pure chocolate to my ears. In a sense he is not well known but in another I would bet just about every violinist on the planet has heard him play without realizing it. The player in question is Louis Kaufman and the few recordings of him on YouTube don't exactly have many hits, at least compared to Thai violinists on skis. So I was surprised to read that he is one of the most recorded American artists of all time, with the caveat that those recordings are film scores. So if you have seen 'Gone with the wind'. you have heard this wonderful player.

It didn't surprise me to learn that he was a respected collaborator with Heifetz, Kreisler and many all time greats although I would have liked some explanation of what that collaboration involved. I presume he wasn't just page turner although we live in a Wikipedia world in which one can say virtually anything about anyone and it is automatically true....
His playing is mostly at that level and his recording of the Saint Seans 3rd and Khatchaturian concertos are absolutely stunning.

I can just listen to that chocolate sound and brilliant technique over and over. However, there is one noticeable defect in his playing, and I do not use these strong words lightly. Somehow, in what I call 'filigree' passage work such as the short chunks of rapid notes linking sustained notes in the opening of the 3rd movement of the Saint Seans, the rhythm is not articulated at all clearly. It is not rubato by any means. it really is a technical unevenness of finger work. The funny thing is that this recurring issue doesn't throw off the accompanying musicians because his sense of the underlying rhythmic structure and placing of beats is absolutely phenomenal to say the least.

Whether it was this awesome ability which made him such a great studio artist or the studio that developed this skill I have no idea but it is fantastic. However, when he plays the Mendelssohn last movement (a stunning performance that may be even faster than Heifetz although I haven't checked) in one of the longer semi-quaver runs he seems to get completely tangled up at one point as though his fingers have dyslexia. I remain puzzled by this because open would not expect this kind of error even from a talented college player. It's inexplicably weird since he demonstrates such a precise and brilliant technique for the rest of the time. It reminds me in some way of Galamian commenting about 'virtuoso playing being incredibly facile yet not really under control.' (Or something to that effect). It is only in this one small area that his playing seem less than perfect, but at the level of Heifetz and Kreisler I suppose it is all the difference in the world.

It's like me eating my boxes of luxury chocolates: I am practically in heaven until I bite into the one stuffed with coffee cream. Just not right somehow! Anyway, go and listen and enjoy some of the most gorgeous violin playing ever.

From Laurie Niles
Posted on January 20, 2014 at 6:24 AM
I believe his solo starts at 3:40, "Dixie," I'd never noticed the inclusion of that Southern classic tune in there! (Also, Buri, if you ever need to unload boxes of fine chocolate, you are always welcome to ship them across the Atlantic to your friendly V.com editor in California...:) )

From Paul Deck
Posted on January 20, 2014 at 8:59 PM
If the Kaufman chin rest is named after this excellent player then I am especially proud to use one.

I wonder if, in the past, performers lived with more mistakes in their recordings than performers do now. Second takes, especially for a whole concerto movement, would have been very expensive then. I am working on the Gavotte en Rondeau from the E Major Partita and I absolutely love Heifetz's recording. Now, you would expect that to be absolutely perfect because it's solo Bach, and it's Heifetz! But in the first section (bar 9 I believe) there is an A harmonic that I have trouble getting to sound right, and I think Heifetz kind of missed it too. (Never mind my playing so far of the whole movement is quite mediocre and the rest of his is brilliant.)

I know what Mother Theresa would say about the chocolates...

From Dave McCaber
Posted on January 20, 2014 at 9:14 PM
Please, you are torturing me. :-) I am a chocoholic. I can only practice if I have a chocolate reward. Please send chocolate top SoCal, first stopping in Santa Monica. I promise to send only partially empty boxes to Pasadena.
Lulz.