February 5, 2012, 8:25 PM · Being in the middle of Mahler's Symphony No. 8, with all the sound surrounding me, took me to a whole new world! It really is an honor. I mean, how often are you going to be able to perform "The Symphony of a Thousand" with 1,000 people? I am age 11, and part of one of the children's choirs that get to perform this piece. My particular choir is the Los Angeles Children's Chorus. The Los Angeles Children's Chorus, warming up before a rehearsal at the Shrine Auditorium

They are one of three children's choirs who performed. Apart from the 800 or so singers in this finale of The Mahler Project, there were also around 200 orchestra members, both from the Los Angeles Philharmonic and the Simón Bolívar Symphony Orchestra of Venezuela. 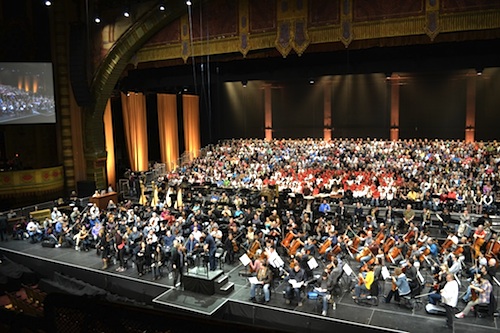 When there is the LA Phil, there usually is Gustavo Dudamel, who is very talented and knows what the decisions are, and when to make them. In the rehearsal at the Dorothy Chandler Pavilion, he said to the choir, "I started to study music when I was four. I started with the trombone, but, my arms! Then I moved to the trumpet, but my mouth hurt. Eventually, I moved to the violin, and auditioned for a choir my friends were a part of, and didn't get in. But the conductor was my teacher, and she never let me sink and stop music. She will pay!" Everyone laughed.

Now, he didn't just say funny things, all rehearsal. He had a LOAD to get done, and to think, now he is going to pack it up, and go down to Venezuela to do all of the Symphonies again! Dudamel conducted all the Mahler symphonies with such emotion and understanding, bringing them to life and allowing you to enjoy it the way it was supposed to be heard. Being able to sing in Mahler 3, as well as Mahler 8, is one of the best experiences in my life, and one that I will never forget.

February 6, 2012 at 04:10 AM · Wow Brian what an amazing thing you have done. I can't imagine how it felt. Were you afraid at all? You must be very brave. I know your parents are proud of you.

Julie nana to Michelle 8 and Johnny 6.