DIY: Making a Case for My Violin

September 30, 2022, 6:54 PM · In this a story, I sing of my adventures in replacing my violin case. It was about time anyway. My previous one was made on the 70's, cardboard, no padding. When the handle broke, I decided it was time for a change.

When window shopping, I came across some fancy Italian case makers. Boy, they were gorgeous (the cases. the makers are meh)! But, man, they also be very expensive (again, the cases)...

Perhaps I should give it a go in making one myself?

Well, there was only one issue: I am not an incredibly talented person with wood (or talented at all, for that matter). For this reason, I scrapped my plans, and decided to buy what I could afford. This was a few years ago. I decided to go with a Tonarelli, with a big USA sticker on the top. 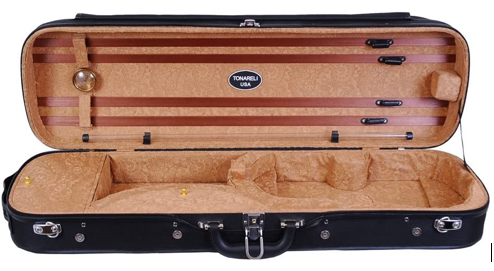 Unfortunately, on the end of year one, I accidentally dropped it on the floor. All the foam padding got unglued from the bottom (no pics of that, sorry).

Around this time, I also moved to a colder country. My violin was feeling the dry weather. I had read somewhere that it would be a nice idea to have natural, moisture-adsorbing fibers inside the case (instead of plastic and hot glue only).

This is when I decided to rehouse my violin again.

THE PROCESS OF REHOUSING MY VIOLIN

I had my heart set on this Momentum, from Musafia. I found that case gorgeous. However, it was also crazy expensive. When someone beat me to bid for a used/display model, I decided that I had to make do with what I had.

However, this is when maths came haunting at me. How can a poor physicist afford a case like that? Well: Make yours, of course! With this in mind, and some rough information gathered from here and there, I made my plans.

I started by stripping the case I had. To the bare wood. Once stripped, I noticed there were no real structural elements, as you can see from the picture. 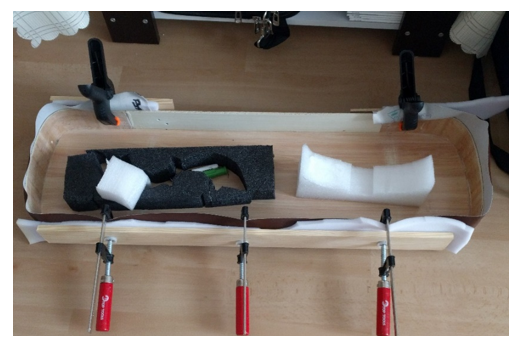 Fig 2 - And now we have a stripped case

My first task was to solve the following problem: How to avoid all the padding to break apart if an impact ensues? I quickly found that the answer was: make sure that the case is structurally sound. This is easier said than done, as I discovered almost as fast that there are no widespread manuals showing how to do it.

Exploring the website of Musafia, however, I came across some low-resolution images that “inspired” me on how to bite this problem. With a bit of drilling and a few metal fixtures, I stuck some wood transversally inside my case. No more structural deformations when pressed from the sides! 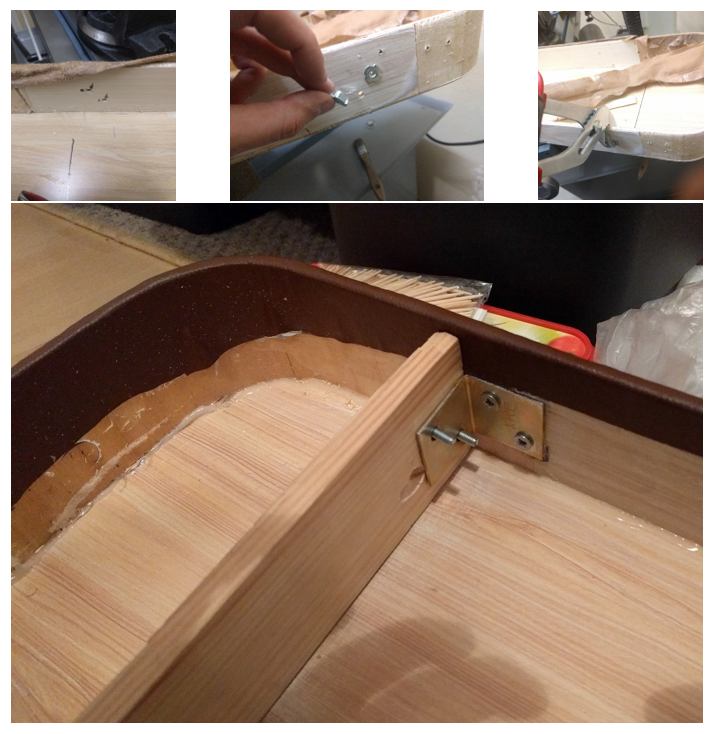 Fig 3 - Trying to increase the structural integrity of the case.

The next thing was: How to make the instrument sit nicely in the case? I couldn’t just leave it rattling there. Luckily, the website of Mr. Musafia also has some info on this matter. Something about a "contour-fitted interior." So off I went. Prepared a pattern of my violin, added 3 cm of clearance, and chopped away at some high-density foam leftovers from the shipping of some very expensive equipment. Of course, some extra cutting around the metal fittings was necessary, as they did introduce some unevenness to the wooden case walls. 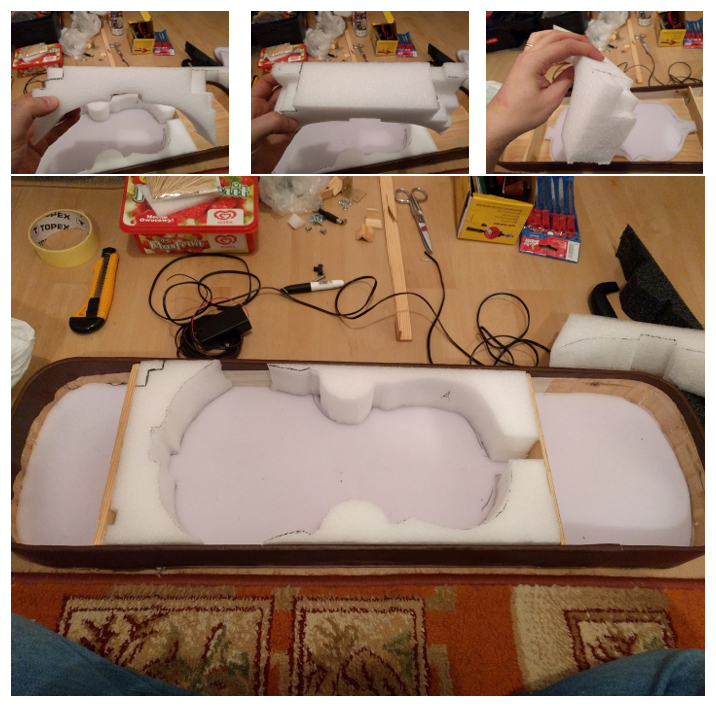 Fig 4 - How difficult can it be to make a French fitting?

This is when I went out and bought some nice cloth to make the interior. I went with white and blue velvet with high viscose content, simply because they were on promotion. I also bought synthetic leather to line the exterior and sides of the case. I always found the leather outside those fancy violin cases charming, and I would like to have it as well! To pad the case, I went with thin foam mattresses. I settled on 1cm-thick for the bottom and 3cm-thick for the sides.

First task was to glue the leather. I did it with fabric glue, all around the case. This is what is actually shown in the first picture above. Once the leather settled, I assembled everything again, to see if it would fit. Well, it did!

A considerable amount of experimentation went in doing the remainder of the insides of the box, and I have no pictures of the process, unfortunately.

With the leather in place, I coated the foams with the blue cloth, and new structural wooden planks with the white velvet. I then cut the 1 cm foam to fit on the exposed wood on the bottom of the case, and covered it with the blue velvet. The youtube videos of Adam Savage helped a lot when doing all this gluing! He has some instructables made in his garage, where he makes nice display boxes covered with canvas. I followed his directions and covered all surfaces that needed covering. The same went for the lid of the case, which was considerably easier. I only had to line its sides with leather, and the bottom with blue velvet.

The only missing surfaces were the padding around the violin, and around the sides of the case. This was the most difficult part to do. It turns out that you cannot just glue the foam there! It doesn’t look good (and doesn't stay, but that is another issue). My savior was cheap plastic skirting. They are rather easy to handle and relatively stiff – Bingo! Gluing the 3cm foam to the skirting, and coating everything with my white canvas, I was able to do the outline of the instrument. By skipping the foam, I also made a material to line the sides of the box.

I also decided to make a floating safety for the violin. A bit of googling provided the solution: elevate the edges of the instrument, and do not allow the arm and scroll to touch anything. The 1cm and 3cm foams got cut into shape and nicely coated with the white velvet. After some experimentation, all’s done!

Then came the part where everything got glued together. Unfortunately, I could not get that crisp, sharp shape around the violin - as we usually see in the high-end cases. This happened, most likely, because of my choice of skirting as the base material to line the sides - as opposed to whatever the hell professionals do. However, the results were quite pleasing to the eye :)

The cover of the gadget-pocket (no idea how we call that) was made with balsa wood, coated on one side with the blue velvet, and on the other with the makeshift leather used for the sides of the case. It was held in place with two furniture hinges from my daughter’s dollhouse. The tricky part was to account for the deformation of the side of the box due to the leather straps that held the box open, so the lid could close. A serious amount of sanding was involved. It was also tricky to account for the thickness of the velvet. But in the end, all worked out! 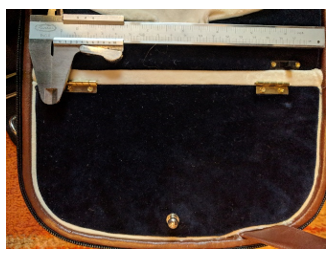 Fig 6 - My deformed gadget lid. Don’t mind the glue on the bottom. Next to it, you see the connected light switch.

At this point, this case had become my pet project. Then why not take a step further and fit LEDs in it? Oh well, great idea! As everything was disassembled anyway, I passed some wires through the outside of the case, and drilled some holes at strategic points.

Here, some pictures from the website of Musafia came in handy again. If you place the LEDs just at the right angle, you can get quite a charming light scheme. LED supports were, thus, installed on the side of the case in strategic positions. The wiring was routed through the outside, through the side to a hole in the foam. A 9V battery was used to power everything, and was fitted inside the accessories container (really, no idea how that space is called). It is held in place with a 3D printed support and assembled with an easy connector to avoid a possible fire. 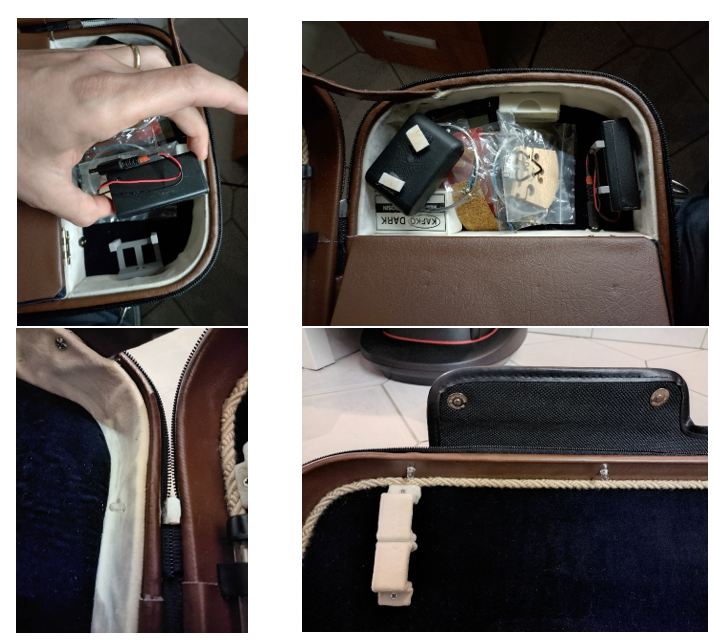 Lastly, I installed the add-ons on the top of the case. Where the walls met the top of the lid, I glued some sort of string. The reason was to hide the ugly meeting of the leather with the velvet. Mission accomplished!

The bow locks were reused from the previous case. The parts holding the bow tips were 3d printed and coated with velvet. To add a nice decoration to the cover, I enveloped a balsa wood strip with the white velvet, and glued it to the center of the lid. At its end, I stuck a piece of foam to function as part of the floating system. 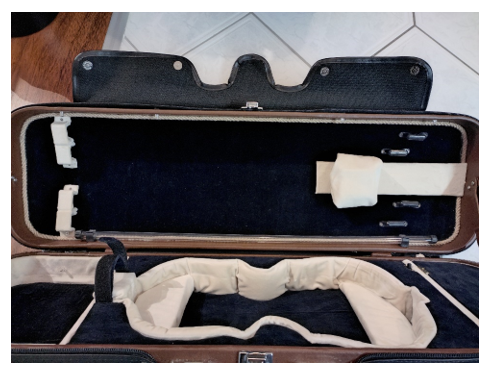 Finally, the case was done. Last task was just to dress it on its original black canvas cover. Easier said than done. All that external wiring required extra experimentation (we do not want a nicked wire or a fire, do we?). The final pictures are below. 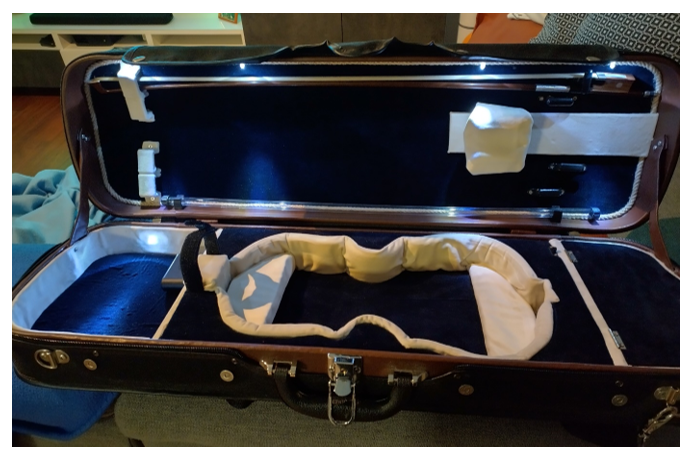 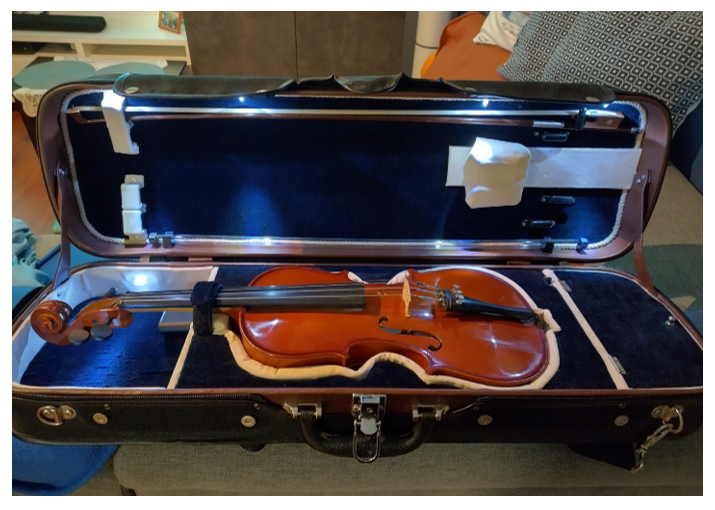 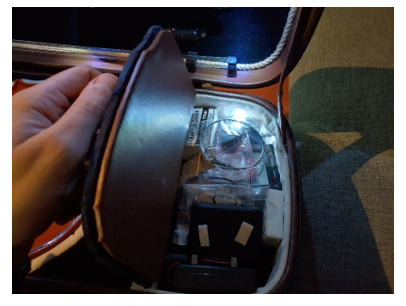 Fig 11 - Lights inside the compartment too! 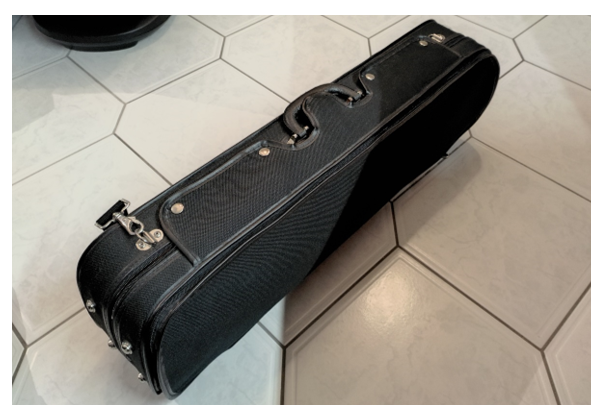 Fig 12 - The outside hasn’t changed much, though.

If you have made it so far, thank you for reading.

All in all, I really like this case. I also own a Musafia now. However, it does not hold a candle to my own case! Mine looks nice, and – most importantly – I love it. Sure, there are flaws here and there. And it is heavy (no, really heavy. Heavier than that. I mean it.) But I suppose I need to exercise more often anyway, specially working on a lab and all.

This surely was a very fun project. And I really look forward to doing something like this again. My wife, on the other hand, is less excited about having glue, clamps, diagrams, dust, and paper clippings lying in the living room for a few months. I am also not sure I can now keep the little fingers of my toddler away from all the glue, tape and alluring papercraft items associated with the activity of modifying a case.