October 5, 2016, 6:57 AM · The idea that J. S. Bach's Sei Solo (Six Solos) for unaccompanied violin have a religious meaning, in one form or another, is an old one. Perhaps it's because something about the music can feel so vividly yet ineffably "spiritual." In any case, the whole premise has assumed something of a mythical quality, being so often repeated and in some ways seeming so plausible while at the same time being frustratingly difficult to pin down concretely.

Helga Thoene has even gone so far as to suggest that these sonatas and partitas contain a dizzying tapestry of numerological codes and chorale citations pointing to religious themes, though most scholars doubt that these were actually intended by Bach.

So is there anything to this idea of theological signification in the sonatas and partitas—anything that can be meaningfully demonstrated and more plausibly attributed to the composer's design than to coincidence or interpretive fancy?

What's interesting is that the awesome Ciaccona, with its powerful evocations of lament (and, I suggest, a fundamentally chiastic or cross-shaped structure) is followed two movements later by a similarly monumental fugue in the "pure" key of C major, which contains something like resurrection imagery. There is historical justification for associating the C-major fugue's subject with the lamenting Lutheran chorale "An Wasserflüssen Babylon"—and what is interesting is that, according to the Weimar hymnal from Bach's day, the passion chorale "Ein Lämmlein geht und trägt die Schuld" was sung to the same melody. This fugue subject, with its associations of lament and possibly the passion of Christ, is accompanied by a countersubject consisting primarily of a chromatic descent, a frequent emblem of lament; but after a round 200 measures, Bach writes the words "al riverso," and what follows is an inversion of the lament/passion-associated subject and countersubject, such that their former inexorable descent becomes an equally inexorable ascent. 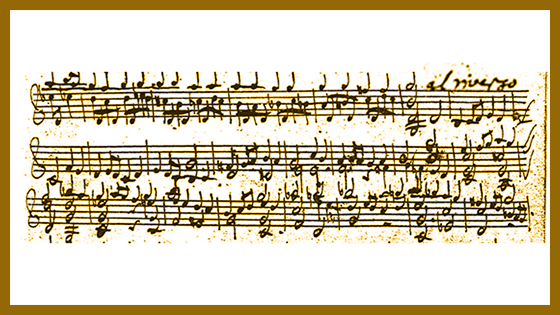 If this is intended by Bach as resurrection imagery (and I have come to think there is considerable evidence to suggest that is likely), it would indicate, firstly, that there is at least some theological signification intended in the Sei Solo; and secondly, that the means of this signification is not numerological encoding or the like but instead the kind of musical allegory that one finds so abundantly in Bach's vocal music.

And, in fact, a number of other details of the Sei Solo—from the use of established musical tropes to curiosities of penmanship to arrestingly elegant numerical correlations—would seem to suggest that the signification is probably quite extensive. Although there isn't space to go into detail here, for any who may be interested, I've recently put forward a study (accessible here) that examines the extent to which the Sei Solo might have been conceived as a "symbolum," a representation of the heart of Bach's faith.

In the end, though, since the Sei Solo can be endlessly enjoyed without recourse to notions of theological symbolism, does it even really matter? Maybe we've each got to decide that for ourselves. I personally enjoy playing Bach's music on period instruments, even though I know "authenticity" is an elusive concept and the music can be played wonderfully on modern instruments. But somehow I find that the old instruments help me to connect with this music now, in the present.

And that's what counts. Maybe these proposed allusions to an extra-musical narrative in the Sei Solo will add a dimension to the music for some; and I might also hope that a careful consideration of this question of signification in the solo violin works could contribute to profitable conversations about Bach's processes and priorities in composing secular instrumental music.