Master Class with Gil Shaham at the Colburn School

December 21, 2022, 12:58 PM · "I come from a family of scientists, and I’ve always been fascinated by the similarity of music and art to science: many solutions have to be tried...the majority of them won’t work out," said Gil Shaham, the world-renowned concert violinist, during a public master class held at the Colburn School in Los Angeles on December 11. What a beautiful way to confirm interrelations amongst disciplines that appear distant; Shaham’s comment was clearly an invitation for attendees and participants to experiment. Discovery is accessible and we, as students need only strive to achieve it.

To witness a masterclass by Shaham was a treat for the senses; for me — the imagination. I experienced this in his storytelling throughout, and the feedback he gave felt clear and accessible. 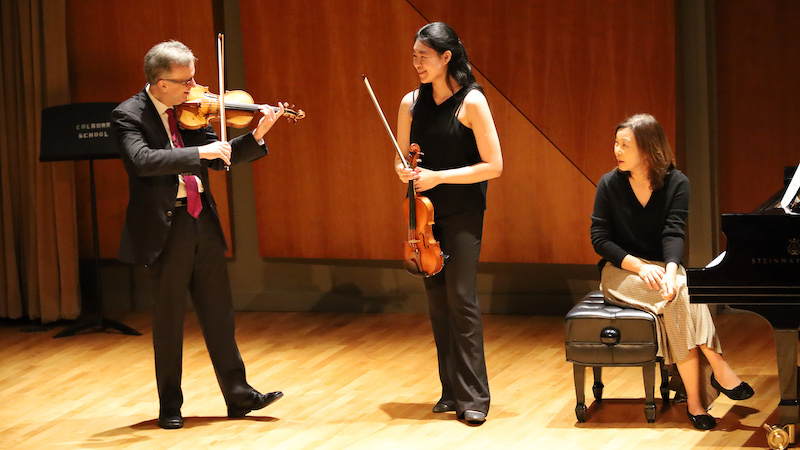 The masterclass featured the school’s students, each representing the three departments of music: the Community School, the Music Academy and the Conservatory. The first performer was Andrés Engleman, from the Community School. He opened the program with Maurice Ravel’s Tzigane, accompanied on the piano by Roberta Garten.

Andres played with a calm and collected manner, managing devilishly difficult passages with ease. His presence on stage didn’t suggest a showy performer but rather a mature and collected demeanor. As the piece came to a conclusion, with an exhilarating accelerando to the final bars, Andres raced forward with passion and direction, hitting the final pizzicato chords with a swish of the bow.

Mr. Shaham immediately praised his performance, commenting that Andres had played the piece with more ease than when he had learned it as a young student. 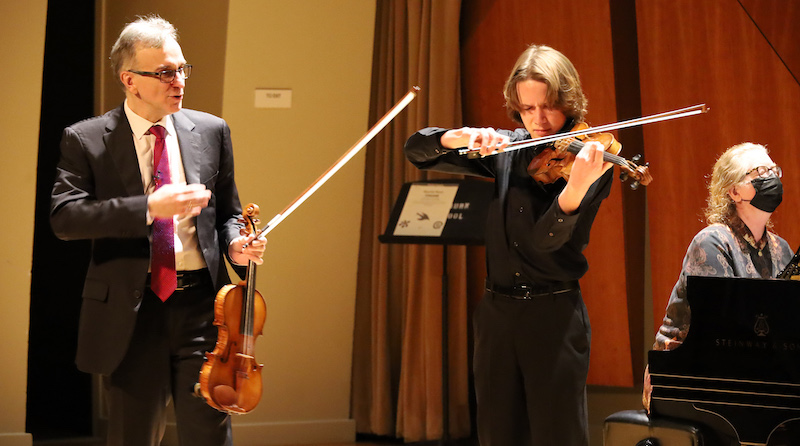 "People that know me will tell you that when I don’t have anything to say, I’ll say — use more bow!" Shaham emphatically pointed out that this was especially important in the double stop variations marked fortissimo. "Consider using more bow; broader strokes. It’s the fire of the section. Smoke!"

Andres played the passage again drawing nearly his entire bow across the strings. His tone was significantly more vibrant. Shaham also suggested "punching out" the notes in the lower register as they can easily be drowned out by the competing piano part.

"Tzigane is interesting in the sense that it’s not a composition about the traditional concert hall idiom. It’s about the gypsy violin." Shaham pointed out the many elements of Gypsy folk music and encouraged Andrés to search for those raw and unrestricted qualities to bring to the stage.

Next, Music Academy student Ashley Tsai played the first movement of Tchaikovsky’s Violin Concerto in D Major, accompanied by Inyoung Huh. From the moment she stepped on stage, Ashley’s presence as a performer was captivating as was her beautifully crafted interpretation of the piece. With great skill she allowed each new phrase to naturally unfold and come to life.

Shaham congratulated her performance, musical creativity and willingness to explore different ideas within the piece. Ashley shared that this was her second time learning the concerto; and that her intention was to search for new colors and textures to explore and ways of making it her own. 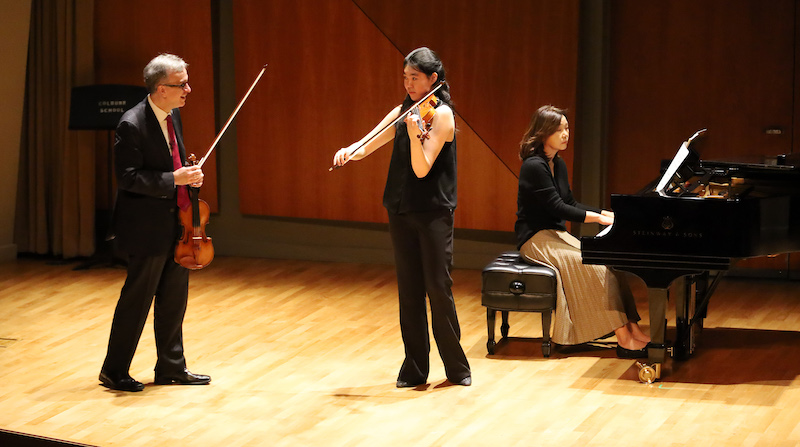 "This music reminds me of how singers operate their voice with embellishments," Shaham pointed out. Places like the beginning and the first theme are filled with opportunities to relish the richness in Tchaikovsky’s writing. Invited to play once more, Ashley played the beginning again. Immediately, one could notice a significant improvement; she allowed for long lines to soar like a vocalist, and drew attention to minute adornments that frame the lush melodies.

Shaham called attention to how similar Tchaikovsky’s concerto was to the music of Mozart, especially the violin concertos. On his violin he demonstrated how nearly all of Mozart’s concertos have syncopated beats and rhythms in the melody much like Tchaikovsky’s written some hundred years later. Tchaikovsky was a huge admirer of Mozart’s music and regarded Mozart as a "heavenly incarnation of musical divinity," even referring to him as a "musical Christ" in one of his diary entries of 1886. This made me think of Mozart’s music and how much of it is inspired by vocal gestures and techniques, specifically the Italian opera style called bel canto — beautiful singing. Shaham concluded by encouraging Ashley to pursue new ways to develop her own voice in her playing.

Lastly, Conservatory student Charlotte Marckx played the first movement of Prokofiev’s Violin Concerto No. 2 in G minor. As someone who’d never heard this piece before, I was intrigued by how varied the emotions were through sections of the piece—from raw, unabashed double stops to ascending scales in high positions on the E string marked pianissimo. There were also stunning lyrical melodies reminiscent of the popular song "La Vie en Rose."

After the performance, Shaham applauded her for cleanliness in technique and commanding stage presence. He then offered ideas for bringing more contrasts to the piece.

"This piece is interesting because the music is rather like machinist writing. It contrasts the folk influences that are weaved in there, too." Prokofiev wrote portions of this concerto while he was abroad in Paris—which might explain the "La Vie en Rose" likeness. Additionally, elements of traditional Russian and Ukrainian music are evident in his writing. Shaham remarked on how the music also evoked cinematic qualities.

"Prokofiev is quoted to have said that the section with delicate ascending scales was like ‘the wind through the graveyard,’" When Charlotte played this section again, I could almost hear the sounds of rustling leaves disturbed by silent winds. The imagery was striking.

After the master class, Mr. Shaham told me that "I hope to encourage students to continue on the paths that they’re already on. I look for what I can offer to support them continue on their journey."

I’m very honored for the time that Mr. Shaham dedicated to sharing his artistry and craft with all of us at the Colburn School; I left the concert hall smiling!

December 22, 2022 at 01:17 PM · Arian, I hope we hear a great deal more from you in the years to come. I also truly enjoyed your article and thought it was incredibly well-written. Thank you so much for sharing your insights!